"They wanted to ensure I had a strong enough backbone, my own passion for it and work ethic," Maya said of her parents, Ethan Hawke and Uma Thurman

Maya Hawke is opening up about her pursuit to become an actress with two famous parents.

Maya, who is the daughter of Ethan Hawke and Uma Thurman, recently spoke to The Guardian about seeking her parents' approval of her acting career, sharing that they were cautious early on.

"They were wary of the public life side of acting and the difficulties of that. They also tried to protect me from falling into acting," Maya, 23, said in an interview with the outlet published Sunday. "They wanted to ensure I had a strong enough backbone, my own passion for it and work ethic. They didn't want to cart me along every red carpet or have me do bit-parts in their movies."

"Once I was old enough, and it was clear they were my choices, they were very supportive," she said.

Maya broke into acting as Jo March in the 2017 miniseries Little Women. In 2019, she had a role in Quentin Tarantino's Once Upon a Time… in Hollywood. Tarantino also directed her mother in Kill Bill Vols 1 and 2.

When asked if she'd like to inherit her mother's role in Kill Bill Vol 3, Maya said, "There are always rumors about that."

"Quentin is on his own darn schedule," she said. "He'll do what he wants when he damn well wants. But I've known him my whole life and if he ever wanted to work with me again, of course I would love to."

Maya revealed she is currently working on a Wes Anderson film.

"I'm currently in Spain shooting Asteroid City, which is very exciting," Maya said. "I'm the biggest fan of his work so it's a dream come true."

In May, the actress told PEOPLE "there was no moment" in which she decided to do acting as a career.

"I was always just doing school plays and acting camp over the summer," she said. "I guess it clicked for me that I wanted to do it professionally was when I realized that there were no school plays for adults. The happiest place in the world for me was on set or on stage."

"I feel so lucky to get to participate," Hawke added. "I love this business. I love movies. I love art. I love it so much." 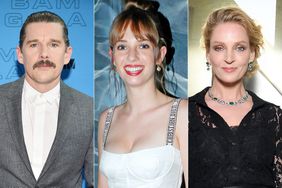