Matthew McConaughey is opening up about his potential future in politics.

The actor, who previously said running for governor in Texas is "a true consideration," recently taped an appearance on The Carlos Watson Show and noted that entering the world of politics would definitely be "challenging."

"I'm not interested in going and putting a bunch of Band-Aids on that are going to be ripped off as soon as I'm out, I'm interested in building something that can last and I'm measuring what category that is, I don't know if that's politics," he said. "That whole embassy of politics has some redefining of its purpose."

When asked how he would feel about going up against an opponent, the Dallas Buyers Club star again emphasized the need for enacting lasting change that goes beyond a politician's term limit.

"I trust my core beliefs enough, and my values enough, to feel comfortable listening to an opposing one," McConaughey said. "We try to teach our kids delayed gratification but we don't like to think about further than tomorrow, we need immediate results."

"How many things do actual leaders and politicians get done that now become realized later on after they're off? They never get credit for them," he continued. "You only get credit for wins and Ws and Ls for what you did in that bank of those years, we've got to make some sacrifices for larger rewards tomorrow."

McConaughey then cited the politicization of wearing face masks to protect against COVID-19 as an example.

"I think the best example, for my mind, this last year is the damn dispute over the masks that got politicized," the Oscar winner said. "I'm like, 'C'mon man, I'm not believing you're really scared of this little cotton thing, and I'm not believing you really feel that takes away your identity and your freedom.' "

McConaughey has previously hinted that he felt he could make a greater impact outside of politics. "I have no plans to do that right now, as I said, that would be up to a lot of other people," he told host Stephen Colbert on The Late Show last November.

However, in a March interview with The Balanced Voice podcast, McConaughey reversed course a bit, sharing that he would consider running to be the governor of Texas.

"I'm looking into now again, 'what is my leadership role?'" the actor said, according to The Hill. "Because I do think I have some things to teach and share. What is my role, what is my category in my next chapter of life that I'm going into now?" 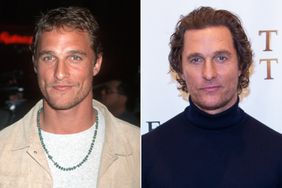