Does Scarlett Johansson still have a role in the Marvel Cinematic Universe?

Marvel Studios President Kevin Feige didn't rule out whether Black Widow, out July 9, marks the final bow from Johansson's Natasha Romanoff in a Tuesday interview with Entertainment Tonight — but did say he'd love to work with her again.

"Marvel is always about new beginnings and Scarlett Johansson is such an amazing partner for us," he said. "She was a producer on [Black Widow]. She was the one that brought us our amazing director, Cate Shortland."

"I am excited to continue working with her in any way possible if we're so lucky," added Feige, 48, who is also a producer on the film.

Johansson, 36, first appeared as Natasha Romanoff in 2010's Iron Man 2, before going on to reprise her role in several other films within the MCU. Her character dies during the events of Avengers: Endgame, sacrificing herself over Jeremy Renner's Hawkeye to retrieve the Soul Stone and help bring back the Thanos (Josh Brolin)-snapped population.

Kicking off Phase Four of the MCU, Black Widow takes place following the events of 2016's Captain America: Civil War and finds assassin Natasha coming to terms with her complex past.

"I've had an incredible decade working with my Marvel family," Johansson said of her time playing the superhero on Monday's Good Morning America. "I'm going to miss not seeing them every 18 months or two years, like those kind of milestones I always really look forward to."

She added of Black Widow, "But I feel really proud of this film and I think it's great to go out on a high note. This movie is so different from any other Marvel film that we've done so far, so yeah ... it's bittersweet."

Meanwhile, the two-time Academy Award nominee is set to take on producing duties for a new film based on the Disney Parks attraction The Twilight Zone Tower of Terror, according to Collider and Deadline.

While plot and cast details have yet to be revealed, Josh Cooley, who directed Toy Story 4, is on board to write the screenplay, per the outlets. Johansson will team up with Jonathan Lia to produce, under her These Pictures company.

Johansson's project joins a long list of films based on Disney Parks attractions, including the blockbuster Pirates of the Caribbean franchise and a soon-to-be-released Jungle Cruise movie starring starring Dwayne "The Rock" Johnson and Emily Blunt.

Disney also has a new Haunted Mansion movie in the works as of last August, after first releasing a film based on the ride almost two decades ago.

Black Widow is in theaters and on Disney+ Premier Access July 9. 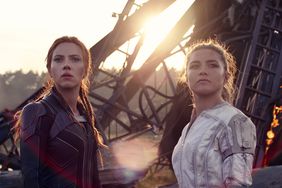