Hollywood glamour girl Martha Hyer, an Oscar nominee when she played opposite Frank Sinatra in 1958’s Some Came Running and memorable as William Holden‘s stunning society fiancée in the 1954 Audrey Hepburn romance Sabrina, died in her Santa Fe home on May 31, it was reported Monday by the New Mexican newspaper, which said she had lived in the town since the mid-’80s. She was 89.

Besides the roles she did play, several of them in Westerns, Hyer was also known for a role that got away: victim Marion Crane in Alfred Hitchcock’s 1960 classic, Psycho. Instead, that went to Janet Leigh.

Born in Fort Worth to a Texas legislator father, and sent to school at Northwestern University, Hyer wrote in her 1990 autobiography, Finding My Way, “Movies were magic, our passport to outside.”

RKO signed her after a talent agent spotted her playing a bearded elder in a Greek tragedy at the Pasadena Playhouse. Early movies were mostly B affairs, including Abbott and Costello Go to Mars, and a brief marriage to director C. Ray Stahl did little to push her career forward.

But then Paramount director Billy Wilder cast her in Sabrina, which also starred Humphrey Bogart, and things began to change, at least in terms of steady work. Hyer’s costars in the 1950s into the ’60s included Rock Hudson, Jerry Lewis, Bob Hope, David Niven and Donald O’Connor (with Francis, the Talking Mule).

After appearing in The Best of Everything, opposite Joan Crawford, The Carpetbaggers and The Sons of Katie Elder, with John Wayne, Hyer did some TV work, including a guest spot on the Western Rawhide.

Her second marriage was to successful Hollywood producer Hal B. Wallis, whom Hyer wed in December 1966, and they were married until his death in 1986.

According to her autobiography, which she wrote under the name Martha Hyer Wallis, she objected to Wallis’s tight hold on her spending, and she liked to spend – and talk about it. After she wrote a first-person account for Life magazine on the high life in Hollywood, the Wallis home was burglarized.

The New Mexican also reported that at one time she fell prey to loan sharks – but eventually found redemption through religion. (Husband Wallis reportedly got the FBI involved and settled the debts.)

The paper went on to say she became reclusive in her later years, though she did paint, hike and share time with close friends.

“When you live with fame as a day-to-day reality,” Hyer was quoted as saying, “the allure of privacy and anonymity is as strong as the desire for fame for those who never had it.” 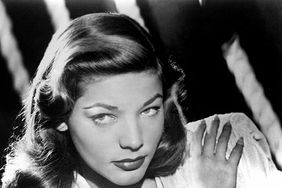 Lauren Bacall: Her Life in Pictures