Mark Ruffalo knows just how to poke fun at his Avengers costar Chris Hemsworth on his birthday.

The first is a selfie of them on set, with Hemsworth wearing the bushy beard and long hair Thor sported in the movie during his character's depressive state post-Thanos beating them in 2018's Infinity War. Ruffalo, on the other hand, is covered in motion-capture dots to later digitally transform him into Hulk.

But it's the second picture that pokes fun at Hemsworth, with the actor seen in his fat suit from the film while lying on the floor.

"Hope you are spending your birthday well, brother! (Maybe not partying as hard as the second pic though…)" Ruffalo wrote in the tweet.

Hemsworth's birthday comes days after his wife Elsa Pataky was forced to escape a flood in Australia by climbing out of the window of her car.

Pataky documented her experience getting caught in a flood while driving. The actress, 44, was trapped in her car and ended up having to escape through her window, she explained on her Instagram Story.

"I got stuck, yes. Awesome. Oh god, oh god, what am I doing?" Pataky said in one clip, according to a fan account that reposted the actress' stories.

"A bit too optimistic? I was so sure I could cross!" she captioned it, adding, "What two days of rain can do!"

As she showed the water rising around her, the Fast and Furious star remained optimistic. She teased herself in the next slide, writing “great job, Elsa.”

Then, Pataky showed her triumphant escape, climbing out of the window and wading through the water towards two of her children, who were standing on an area of the road that was not yet flooded.

"My only option... through the window!!" she captioned the video. 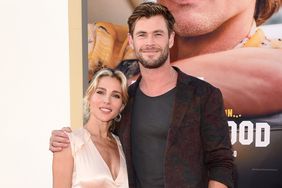