Mariah Carey abruptly pulled out of her role in Tyler Perry’s new film this week, PEOPLE has learned, sparking renewed speculation the singer/actress is pregnant.

Carey, who won acclaim for her work in Precious, was set to appear in the adaptation of Ntozake Shange’s 1975 play For Colored Girls Who Have Considered Suicide When the Rainbow Is Enuf. Filming was set to start next month.

But on Tuesday Carey abruptly withdrew from the project.

“I’m not at liberty to discuss her personal life at this time,” Carey’s spokeswoman Cindi Berger says, declining to give a reason for Carey’s withdrawal.

Carey, 41, recently celebrated the second anniversary of her marriage to Nick Cannon.

Facing pregnancy rumors nearly from the start, Cannon, 29, has made it clear the couple want children. “We’re going to do it, and when we do it we’re going to let you all know,” he said last year. “But right now, we’re trying to enjoy the newlywed aspect.”

PeopleTV Archive: Nick Cannon: ‘Mariah and I Are a Romantic Comedy’ 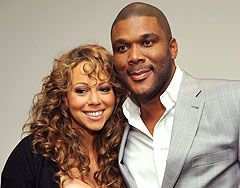