Catch up with the beloved holiday rom-com's big stars

By Christina Butan
Trending Videos
01 of 22

By Love Actually's 2003 release, Grant already had quite the roster of films on his résumé, including Sense and Sensibility, Notting Hill and Bridget Jones's Diary. The English star married for the first time in 2018, has kept busy being a father of five, and is still acting — you can currently see him in HBO Max's The Undoing.

And, about that famous dance scene? Grant revealed he was reluctant to do it — but said he is now proud he was able to pull it off.

"People do like it," he said in The Jess Cagle Interview. "I'm proud of the fact I did it without any stimulants."

McCutcheon hasn't stopped feeling the holiday magic since playing Hugh Grant's love interest in the rom-com — she also starred in Elf: The Christmas Spectacular, a musical tour in the U.K. based on the Will Ferrell film.

The actress recreated her special Love Actually scene (where she jumps into Grant's arms at arrivals) in 2017 by greeting travelers at London's Heathrow Airport.

"It was one of my all-time favorite scenes to film," she said in a press release. "Even now I get so excited every time I'm at Heathrow — welcoming someone home is such a great feeling that never gets old!"

The actress was just 17 years old when she starred in the holiday film. In the same year she made her debut as Elizabeth Swann in the Pirates of the Caribbean franchise — she's starred in all five films, with the most recent out in 2017.

Knightley has not missed a beat on her acting career, starring in a movie, TV series or short every year since she appeared in Star Wars: Episode I in 1999.

Knightley shares two daughters with husband James Righton, whom she wed in 2013.

In the years surrounding his brief role as an unsuspecting husband in Love Actually, Ejiofor was one of the industry's premier "that guy" actors, popping up in small parts in big films like Inside Man and Children of Men, as well as anchoring indies like Dirty Pretty Things and Kinky Boots. After his star-making turn in 2013's 12 Years a Slave, the London-born actor has one Best Actor Academy Award nomination under his belt. In 2016, he joined the Marvel Universe as Doctor Strange's Mordo.

Lincoln starred in arguably one of the most iconic scenes in rom-com history — and then got cast in quite a different role for zombie apocalypse TV series The Walking Dead. Lincoln starred as the main character of the show since 2010, but confirmed his departure from the series in July 2018. However, his character will live on in TWD's movies.

Firth has been busy since his Love Actually days, starring in hits like Mamma Mia! Here We Go Again and Mary Poppins Returns. It was revealed in 2017 that the actor almost switched roles with Hugh Grant in the film, but eventually everyone settled into their characters.

Firth split from his wife of 22 years, Livia Giuggioli, in 2019. They have two sons, Luca and Matteo.

Moniz, who plays Colin Firth's love interest, only speaks Portuguese in the film, while Firth only speaks English — but that doesn't stop them from falling in love.

The Portuguese actress is also a singer who participated in Eurovision's singing contest in 1996, and has released four albums. Currently, Moniz mostly stars in international films and TV shows.

A lot has changed for the action star since Love Actually, including the tragic death of his actress wife Natasha Richardson in 2009. After her death, Neeson threw himself into work and has appeared in dozens of movies in the years since.

"It's [the film] 14 years ago now and we've all lived lives," the actor said of Love Actually in a 2017 interview with Entertainment Weekly. "Some of us have died. Oh, my dear old friend Alan Rickman, God rest him. Some have gotten divorced. I've lost my wife. And, oh, sure, plenty of times I've thought about this film and my own life. Love Actually, that's the way it is. That's the tapestry of life."

Brodie-Sangster — who played lovelorn moppet Sam in Love Actually — has grown into a serious actor, trying his hand at everything from Phineas and Ferb to Game of Thrones and The Maze Runner franchise. Most recently, he starred as chess pro Benny Watts in the hit Netflix drama The Queen's Gambit. He's still got those same twinkling eyes, though.

In 2016 at 69 years old, Rickman died from cancer. The prolific British actor already had quite the career before the rom-com, with iconic roles in Die Hard, Sense and Sensibility and the Harry Potter franchise.

The final project the actor worked on before his death was the film Alice Through the Looking Glass.

Since Thompson's Love Actually days, she's become a Dame — one of Britain's highest honors — and was appointed by Prince William himself. The actress also co-wrote the holiday romance movie Last Christmas and has filled the shoes of many characters since 2003, including Mrs. Potts in Beauty and the Beast, P.L. Travers in Saving Mr. Banks and Professor Sybill Trelawney in the Harry Potter series.

The German actress is best known for her role in the rom-com, as well as starring in The Resident in 2002 and The Book Thief in 2013. She welcomed a daughter in 2007, and has continued to act in mostly German films.

From voicing characters in popular video games (including The Elder Scrolls Online and Destiny 2) to playing Davy Jones in The Pirates of the Caribbean and guest starring in Doctor Who, the actor has been constantly working since playing rocker Billy Mack in Love Actually.

He's currently working on several films (and video games), and most recently had a part in the Jane Austen adaptation Emma.

Linney's established acting career started in the early '90s — she's won four Emmys for her TV performances in shows like Frasier and Showtime's The Big C, and has also won two Golden Globes.

Since her Love Actually days Linney has appeared in more than 25 films and 10 TV series. She even got a happy ending for her character in the Love Actually mini-sequel in 2017, nabbing a loving husband played by Patrick Dempsey.

Just before playing the sexy co-worker on Love Actually, Santoro appeared in Charlie's Angels: Full Throttle. The Brazilian actor's career took off after 2003, and he landed roles in the 300 films, Lost and a spot as Jennifer Lopez's on-screen hubby in What to Expect When You're Expecting. Santoro most recently starred in HBO's sci-fi hit Westworld.

Thornton's award-winning acting career started 17 years before his role as the U.S. president in Love Actually.

He's currently married to Connie Angland, his sixth spouse, and mother to his teen daughter Bella.

Before his role as a jewelry salesman in Love Actually, the English actor was (and still is) best-known as Mr. Bean, a comedic character created in 1990 for a sitcom. Atkinson has starred in several movies, shorts and even voiced an animated series as the character.

Love Actually sparked Olson's career in 2003 — after her memorable scene singing Mariah Carey's "All I Want for Christmas Is You" at just 10 years old, she was invited on The Ellen DeGeneres Show and The Tracy Morgan Show. Olson has mostly done voice acting since, notably for animated series Phineas & Ferb and Adventure Time.

From 2001 to 2003, Freeman starred in the U.K.'s comedy hit The Office, and went on to star in other popular TV series and films, including The Hobbit trilogy, Sherlock (TV show) and Black Panther. The actor split from his longtime on-and-off screen partner Amanda Abbington in 2016; they share two children.

Since stripping down with Martin Freeman in their adult film scene, Page gained fame for her lead role in British sitcom Gavin & Stacey. The actress also starred as Queen Elizabeth I in a 50th anniversary episode of Doctor Who. Page has three children with husband James Thornton.

The English actor who was hopelessly in love in the rom-com has continued to star in several TV series, including British show Borderline, Death in Paradise and PBS Masterpiece's Sanditon. Marshall has been married since 2012, and has two children.

Jones just has a cameo in Love Actually, but it's a memorable one. She plays one of the American babes who hooks up with Kris Marshall's nerdy Brit, not the sort of role an actress can really sink her teeth into. Four years later, Jones landed the plum role of Betty Draper on TV's Mad Men, which let her play all the notes (and wear all the costumes) of a privileged and petulant 1960s ice queen until the series' 2015 finale. Jones went on to join the X-Men franchise, and most recently appeared alongside Will Forte and Kristen Schaal in the post-apocalyptic comedy The Last Man on Earth. 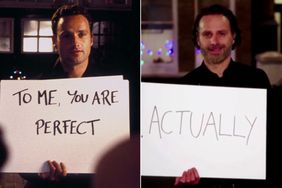 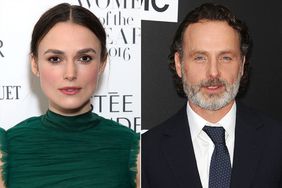 Bring Out the Note Cards! Keira Knightley and Andrew Lincoln to Reunite in 'Love Actually' Mini-Sequel