Liam Neeson‘s stuntman took one for the team.

On Thursday, the Oscar-nominated actor, 67, revealed to Watch What Happens Live viewers and host Andy Cohen that he declined to show his bare backend on the big screen, instead enlisting his longtime stunt double Mark Vanselow to complete the shot.

The memorable scene in question is from 2014’s A Million Ways to Die in the West, directed by Family Guy‘s Seth MacFarlane. In the comedy, Neeson plays the villainous cowboy Clinch, who is knocked out by Charlize Theron‘s Anna in order to escape his clutch.

Neeson’s character falls to the ground with his pants down, exposing his buttocks — presenting the opportunity for Theron, 44, to plant a flower between his cheeks. “That’s better,” she says in the movie before riding away on horseback.

“I said to Mark: ‘Mark, this is a sign of our friendship — would you ever do this scene where Charlize Theron puts a daisy in your butt?’ And he said, ‘Sure,'” recalled Neeson. “I gave him a big hug afterwards and said, ‘There’s no f—ing way that anybody’s going to see my Irish butt.'”

Cohen, 51, laughed at the reveal, saying, “I’m going to resist the opportunity to say what I want to say.”

In 2014, while promoting the film — which also starred MacFarlane, Amanda Seyfried, Neil Patrick Harris and Sarah Silverman — Theron joked about the on-screen nudity.

“I said what any healthy woman would say,” Theron said at the time, according to the Belfast Telegraph. “‘I get to see Liam Neeson’s butt!’ That’s what happened. I can think of so many worse jobs.”

Theron told PEOPLE at the time that she jumped on the chance to show off her comedic chops in the movie, especially alongside MacFarlane.

“The most flattering thing you could say to me is that I could be a match to him,” she said. “I am a huge fan and have been for many, many years. He’s definitely the kind of person that from afar fascinates me. Then you have this opportunity to know someone, and when they don’t let you down, that’s such a gift.”

11 Reasons Why Filming Sex Scenes Is Really Unsexy, According to Famous Actors

She added: “The thing you remember when you’re 80 and lying on your deathbed is that. I’ll remember the friendship and working with Seth on this movie.”

Neeson — who next appears in the romantic drama Ordinary Love — spoke to the Today show in 2014, when he said that he initially thought Million Ways to Die could not be filmed, given its decidedly irreverent humor.

“When I read the script, it made me giggle a lot, let’s put it that way,” he said. “And I blushed quite a few times too.”

Added Neeson: “I thought: ‘No, they’re not going to shoot this. No, they cannot shoot this. They won’t be allowed to get away with this!’ But they did.” 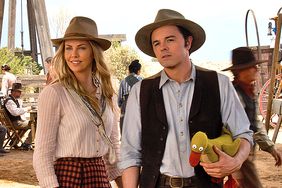