Even social distancing can’t stop the drama on soap operas.

Kristen Wiig and Will Ferrell proved that when they appeared on Jimmy Fallon’s at-home Tonight Show on Wednesday. The actor and Fallon featured in a hilarious new sketch of the soap opera “The Longest Days of Our Lives.”

The sketch opens up with just Fallon, 45, and Wiig, 46, onscreen, each from their own homes through video calls. The fun starts when Fallon accuses Wiig of hiding a “juicy” secret.

“How could you?!” Fallon gasps. “I mean, how could you? We’re all social distancing in quarantine. Was it through Skype or something?”

Wiig tells him it was indeed through Skype and worst of all, with his brother. But not Alejandro, played by Ferrell, 52, in a wig.

“It was another brother,” Wiig says.

But it’s not over yet, as Wiig says that’s still not the brother she cheated on him with.

“There’s another, other brother,” Wiig says as all three of them take turn gasping, with Ferrell quickly taking off the mustache and making Fallon and Wiig laugh.

Ferrell the introduces Fontaine, and the story of the betrayal continues.

Fallon has been hosting his late night talk show from home, welcoming a series of A-List guests every night from different rooms.

Jimmy Fallon’s Daughter Winnie Loses a Tooth During His Interview: ‘This Is Big News!

His adorable daughters also often make appearances, and his older daughter Winnie, 6, even crashed his interview with Ciara and Russell Wilson to share some big news.

“Hold on. I’m sorry. What do you need to show me?” Fallon asked Winnie as she hopped onto his lap. “Wait this is big news guys, tell them what just happened.”

“I lost a tooth!” Winnie exclaimed, prompting cheers from the celebrity couple. 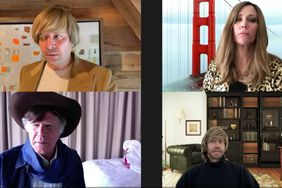