Kim Cattrall has moved on from Sex and the City, and she's asking that fans do too

Kim Cattrall has moved on from Sex and the City, and amid controversy over a scuttled sequel, she thinks fans should let it go too.

The 61-year-old actress responded to a fan on Twitter Friday who questioned her yet again about the dashed plans for Sex and the City 3 — which, according to sources, fell apart after Cattrall said she didn’t want to reprise her role as powerhouse PR maven Samantha Jones in the long-awaited sequel.

“So I’ve seen you doing interviews on ageism yet I see you on [Instagram] saying you’re too old to play Samantha?” the fan named Josh wrote to Cattrall, questioning her about a recent comment she left on Instagram. “I’m so confused!”

“Josh, I’ve played ‘SAM’ for 20 years. Am moving on & so should you,” Cattrall wrote back, plugging her recent two-season Canadian comedy series Sensitive Skin, which is streaming on Netflix. “Trying #SensitiveSkin my show on @Netflix.”

Rumors that Samantha, Carrie (Sarah Jessica Parker), Charlotte (Kristin Davis) and Miranda (Cynthia Nixon) were reuniting for a new film — which would follow 2008’s Sex and the City and 2010’s Sex and the City 2 — had long swirled, with fans hoping to see the fierce foursome from the Emmy-winning HBO series back on the big screen.

But after almost eight years of encouraging words from actors, Parker told Extra on Sept. 28 that any possibility of a third movie is officially “over.” According to Parker, Sex and the City 3 had a “beautiful, funny, heartbreaking, joyful, very relatable script and story.”

“It’s not just disappointing that we don’t get to tell the story and have that experience, but more so for that audience that has been so vocal in wanting another movie,” she said to Extra.

In the aftermath, Cattrall has said that she never intended to do the film in the first place, claiming she refuted an offer to do the film back in 2016.

“I can’t. My heart isn’t in it anymore,” she later wrote to a fan on Instagram. “I’ve moved on. 61 isn’t 53 or 41. I have learned so much from our Sam. She was my hero but I want to rest & not work as much as I have been doing for years. I want a less hectic life. My decision reflects where I am in my life & I can’t change that without being unhappy. I hope you’ll understand.”

Sources have told PEOPLE that Cattrall made “outrageous demands” to re-board the movie franchise, leading studio Warner Bros. to pull the plug, though another source has countered that Cattrall was not happy with the “humiliating” plotlines for her character in the movies. During an interview with Piers Morgan for ITV’s series Life Stories, Cattrall called out Parker — who would have been a producer on the film: “I think she could have been nicer,” Cattrall said.

A source close to the situation shot back to PEOPLE: “Kim is trying to distract from what this is about — which is this: Kim killed the movie.” 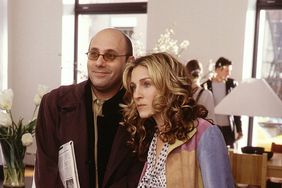 'Sex and the City' 's Willie Garson Throws Major Shade at Kim Cattrall as He Wades Into Movie Controversy: 'Because I'm Toxic'