Katie Holmes new rumored beau was engaged just weeks before the two were first seen together.

Holmes, 41, was first spotted enjoying a date with N.Y.C.-based chef and restaurant owner Emilio Vitolo, 33, early this month, with two more sightings coming quickly after. The two were most recently spotted kissing on the street in New York City, with both bringing their face masks down momentarily to share a sweet kiss. The happy duo was also seen laughing and smiling together during the sighting.

Their outings come just weeks after Vitolo was seemingly engaged to designer Rachel Emmons. A source tells PEOPLE the two were still together days before Holmes was first seen out with the chef.

"In mid-August, Emilio and Rachel were still engaged and living together," the source says. "He broke off the engagement abruptly the second Katie showed some interested. Rachel is shocked. They were planning a wedding and their future together. It's like she never knew Emilio. They haven't had any contact since he broke up with her."

Emmons also posted loved-up pictures on her Instagram before the sighting. The designer most recently posted with the chef on July 27, showing off a gorgeous sunset behind the couple as they sat in a boat.

The day before, Emmons once again posted with Vitolo, this time in a restaurant with the chef leaning in close to her and smiling widely for the picture. Vitolo left a comment full of red hearts on the July 26 post.

According to Emmons' Instagram, the pair seem to have gotten engaged in February 2019, with the designer showing off her ring in a sweet selfie of the two smiling.

"The most celebratory, generous, honest, genuine person I’ve ever met. You always have my back and make every day a new adventure. You walk into a room and people gravitate to you. I couldn’t feel more lucky to spend the rest of my life with you," Emmons wrote alongside the selfie.

It's unclear when the couple called off their engagement, as Vitolo was first seen with Holmes on Sept. 1.

The chef works at Emilio’s Ballato in SoHo, which was bought by his father, Emilio Vitolo Sr. in the early ‘90s. Since then, Vitolo’s entire family has worked there, according to an interview he did with InStyle.

The restaurant has an impressive A-list roster of fans including Whoopi Goldberg, Joe Jonas, Justin Bieber, Rihanna and Bradley Cooper. 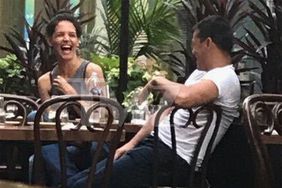 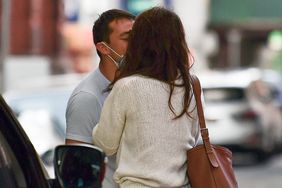