The pair made their public debut as a couple when they attended the Moth Ball's 25th Anniversary Gala at Spring Studios in New York City on Thursday night.

For the evening out, Holmes, 43, wore an ankle-length, bright orange ruffled dress. She accessorized her look with a pair of black strappy heels and small black handbag.

Wooten, 33, meanwhile, kept it cool in a dark green suit with a black dress shirt underneath.

Wooten and Holmes first sparked romance rumors while they were spotted out and about with the Dawson's Creek star's mom Kathy Holmes in New York City last month.

Holmes was previously married to Tom Cruise, with whom she shares daughter Suri, 16. The actress-director was later linked to Jamie Foxx for several years, before they split in 2019.

More recently, she dated Emilio Vitolo. The actress and Vitolo, 34, were first linked in early September 2020, when they were spotted on a date at his N.Y.C. family restaurant, Emilio's Ballato.

"They split several weeks ago. There was no drama," a source told PEOPLE in May 2021 after their breakup.

Wooten is currently playing bass in Moulin Rouge! The Musical on Broadway, and recently played at Coachella with Carly Rae Jepsen.

He also also been been nominated for a Grammy Award in the past, serves as an adjunct instructor at NYU Tisch School of the Arts and is from Chicago — a Midwest transplant like Holmes, who grew up in Toledo, Ohio. 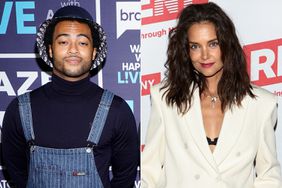