"That studio was just a hotbed of anxiety," said Kate Winslet of Saturday Night Live after Ashlee Simpson's lip-sync incident

Kate Winslet is looking back at her time on Saturday Night Live immediately following Ashlee Simpson’s lip-syncing snafu in 2004.

In a PEOPLE exclusive clip from the Hamptons International Film Festival’s A Conversation with… series, the actress recalled the anxiety on the set of the long-running comedy sketch show at the time.

"When I did SNL I was on the week after Ashlee Simpson. I was the next show after," Winslet recalled. "Let me tell you, that studio was just a hotbed of anxiety."

The Oscar winner continued, "There’s this thing of the opening monologue and they kept saying to me, 'Kate we’re so sorry, we just don’t have it yet, give us a moment.'"

"They go, 'Can you tap dance?'" Winslet said, explaining that she then learned a tap-dancing and singing routine in three hours before attending the dress rehearsal.

"And then we're recording the show live," she said, laughing.

In 2004, Simpson was a performer on SNL and was set to close the night playing her song "Autobiography" when her song "Pieces of Me" instead started playing before she raised the microphone to her mouth.

A backlash soon ensued, with fans criticizing the singer for using pre-recorded vocals for a live performance. She then revealed that she had completely lost her voice due to an acid reflux flare-up, which only led to more teasing from online trolls.

Winslet's upcoming film, Ammonite, will be premiering at the Hamptons International Film Festival, which runs from Thursday to Oct. 14, as a drive-in screening. Other A-list stars participating in this year's series include former The Walking Dead star Steven Yeun and Leslie Odom Jr.

The conversations will be available on Friday, with virtual tickets available to audiences on the Hamptons Film Festival website. 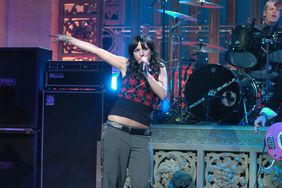