Kate Hudson couldn't hide her shock at hearing Matthew McConaughey was considering a run for governor of Texas.

The 47-year-old actress — who famously starred alongside McConaughey in How to Lose a Guy in 10 Days and Fool's Gold — first heard the news while appearing on the latest episode of of Rob Lowe's podcast Literally!, which dropped Wednesday.

Asked by Lowe if she was going to help McConaughey "with his campaign for governor of Texas if he so decides to run?," Hudson appeared to be knocked speechless.

"Sorry, hold on. Let me just take a sip of my [drink]," she replied, before collecting her thoughts. "I have not heard this. This is the first I'm hearing of McConaughey getting into politics."

"He's a really interesting guy," Hudson continued. "I, honestly, if he does want to get into politics, I believe that Matthew, you probably wouldn't get a politician who would care as much as he does, you know? I think he's very authentic in how much heart, um, but the governor of Texas is a big job. I mean, is that what we're talking about? The governor of Texas? ... Oh, wow."

Hudson laughed and said, "I think he'd encourage that. But I actually feel like he'd have a real chance."

McConaughey spoke about entering politics on the podcast The Balanced Voice back in March, saying his interest in running for governor is "a true consideration."

"I'm looking into now again, 'what is my leadership role?'" He said at the time. "Because I do think I have some things to teach and share. What is my role, what is my category in my next chapter of life that I'm going into now?"

He's since picked up steam, Lowe telling Hudson that McConaughey had polled higher than the incumbent recently, earning a 45% poll as opposed to Gov. Greg Abbott's 33%, according to the Dallas Morning News.

Even hearing that, Hudson couldn't contain her shock at the news, telling Lowe — "Wait, Rob, sorry, this is really shocking to me. This is how out of it I am."

The actress blamed her befuddlement on the fact that she'd chosen put her phone down recently. "I'm one of those people who, I don't look at things," she said. "I turn my news ticker off. So, clearly, I've missed this."

She added, "He is who he is, through and through." 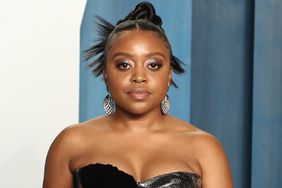