“The T. rex in this movie is the same T. rex from Jurassic Park. She’s been on the island for 22 years. She’s still alive. She’s a little older, and she’s angry.”

We’re very excited, but also we have so many questions:

2. There should be more than one T. rex in the film, because at the end of Lost World, didn’t they return both the mom and baby T. rex to the island?

3. When Trevorrow says “She’s a little older, and she’s angry,” couldn’t he have been referring to Jeff Goldblum? Isn’t that possible?

What Makes Chris Pratt So Funny? 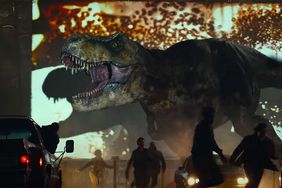