"For all the dollars that would have cost, nobody else could have stood up the way he did," Bradley Pierce said of Robin Williams

Former Jumanji child star Bradley Pierce is looking back on his positive work experience with Robin Williams on the set of the classic film.

In a recent interview with CBCListen, Pierce, now 38, recalled how Williams — who died in 2014 — stepped in to defend the young actor against producers while filming a taxing scene for the 1995 blockbuster.

"We were filming the monsoon scene and I think it was day 7 or 8 in that rain tank," he said. "We were all in wetsuits, but spending 8 hours in the water was really draining. It was coming to the end of the day, and children on set can only be on set for a certain number of hours. Producers approached our parents and said, 'We've only got a half hour left of shooting, is there anyway we can do a little bit of overtime just to get it done?' "

Pierce, who played orphan Peter Shepherd in the film, said that the producers' idea was not "uncommon" in movies at the time, given it would likely save $100,000 to finish filming that day rather than wait.

RELATED: Robin Williams Was 'Struggling in a Way He Hadn't Before' in His Final Film, Says Director Shawn Levy

However, Williams decided to get involved and spoke up on behalf of his young costars.

"Robin caught wind of these conversations happening and apparently he pulled the director and producers aside and said, 'No we're not doing any extra time. You're gonna let everyone out of the pool now and we're going to be come back next week,' " Pierce recalled.

"For all the dollars that would have cost, nobody else could have stood up the way he did," he said of Williams.

Of the late Mrs. Doubtfire star, Pierce went on to say, "In addition to being warm and generous and kind, he was also very protective of all of us. He told everyone, 'we're done today, time to go home.' "

Williams died by suicide on Aug. 11, 2014, at age 63 after suffering from Lewy Body Dementia, a type of brain disease that affects thinking, memory, and movement control.

In August, his children, Zelda, 31, and Zak, shared heartfelt tributes on Instagram to mark the six-year-anniversary of their dad's tragic death. 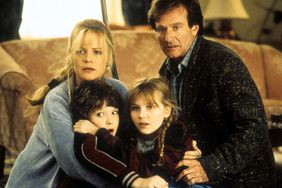