"They are engaged," says their rep, adding that he gave her "a big cluster diamond ring"

PEOPLE’s Sexiest Man Alive, Jude Law, is engaged to girlfriend Sienna Miller after he proposed to her on Christmas Day, a spokeswoman for the couple has confirmed.

The leading man, who met Miller while they were both making the movie Alfie, proposed to her in England on Christmas Day before they headed off with his three children for a vacation to the Seychelles – in time to celebrate both their birthdays. Miller turned 23 on Dec. 28, Law turned 32 the next day.

Spokeswoman Ciara Parks says no wedding date has been set but that Law’s three kids – from his 1997-2003 marriage to British fashion designer Sadie Frost – are “delighted.” The children are Rafferty, 8; Iris, 4; and Rudy, 2.

“They are spectularly happy,” Parks says. “He proposed to her on Christmas day with a gold band and nine diamonds.”

Parks says Sienna has shown her the ring and that “she’s thrilled. Just really thrilled.”

It was in Alfie director Charles Shyer’s living room that Law first met Miller, PEOPLE reported. “They were very discreet,” said Shyer. “They’re both very solid people. They’re good for each other. She’s a remarkably sophisticated young woman who’s very secure in who she is.”

As their relationship grew – and was scrutinized by London tabloids – Miller told British Vogue: “We love each other desperately, and it makes me sad that the press are so cruel and negative.”

Besides Alfie, the Manhattan-born, British-educated Miller has also filmed an untitled Casanova project with Heath Ledger and directed by Lasse Hallstrom (The Cider House Rules) and has been cast to play real-life ’60s New York society darling – and victim – Edie Sedgwick in Factory Girl. 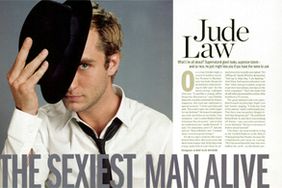 Arms of the Law