Johnny Depp Spotted Out in L.A. with Friends: 'He Was in the Best Spirits'

After an emotional week in Arkansas, Johnny Depp let his hair down last night in Los Angeles.

The Pirates of the Caribbean actor was spotted out at the The Nice Guy in West Hollywood on Wednesday night, where an onlooker tells PEOPLE, “He was in the best spirits.”

At the bar, Depp’s group “sipped on specialty cocktails such as ‘The Chairman’ and ‘The Stand Up Guy’ and indulged on ‘The Nice Guy Burger,’ truffle fries, roasted brussels sprouts and the Wally’s charcuterie board.”

The onlooker adds, “He and his group shared plates at their table and ordered a couple rounds of those cocktails.”

The outing comes after Depp spoke out at a death penalty protest in Arkansas, where his friend and West Memphis Three member Damien Echols also gave a speech.

The duo joined hundreds of activists outside the Arkansas state capitol building on Friday. They had gathered to protest Governor Thomas Hutchinson’s decision to execute eight men in 10 days because the state’s execution drugs are expiring.

Since the executions were announced, a number of successful legal challenges have blocked three men’s death sentences from being carried out so far, according to NBC News. 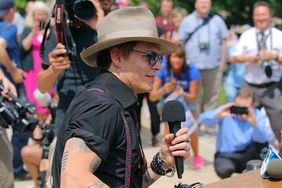 Johnny Depp Speaks Out Against Death Penalty at Arkansas Rally

Beyond a Reasonable Doubt?