Johnny Depp Says 'No One Is Safe' Against Cancel Culture: 'It's So Far Out of Hand'

Johnny Depp is speaking out against cancel culture, saying "no one is safe" from the movement.

"It can be seen as an event in history that lasted for however long it lasted, this cancel culture, this instant rush to judgment based on what essentially amounts to polluted air," Depp recently told reporters at a press conference at the San Sebastian Film Festival in Spain via Deadline.

The controversial actor's appearance comes before he's set to receive the honorary Donastia Award at the event.

"It's so far out of hand now that I can promise you that no one is safe," Depp said. "Not one of you. No one out that door. No one is safe."

"It takes one sentence and there's no more ground, the carpet has been pulled," he continued. "It's not just me that this has happened to, it's happened to a lot of people. This type of thing has happened to women, men. Children have suffered from various types of unpleasantries. Sadly at a certain point they begin to think that it's normal. Or that it's them. When it's not."

The announcement of Depp's honor at the festival was met with controversy. Cristina Andreu, the president of Spain's Association of Female Filmmaker and Audiovisual Media told the Associated Press in August that the honor "speaks very badly of the festival and its leadership."

"[It] transmits a terrible message to the public," Andreu said.

In August, Depp was also honored by another European film festival, the Karlovy Vary International Film Festival in the Czech Republic

Depp's ex-wife Amber Heard previously accused the actor of domestic violence amid their 2016 split, which he denied.

In November 2020, the Pirates of the Caribbean star lost his case against The Sun — the outlet that called him a "wife-beater." The court upheld the outlet's claims as being "substantially true." Following the loss, Depp agreed to exit the role of dark wizard Gellert Grindelwald in the Harry Potter spinoff series, Fantastic Beasts.

In August, a Virginia judge granted the actor the right to pursue his defamation suit against Heard over a 2018 Washington Post op-ed where the actress wrote about surviving domestic violence.

The judge denied Heard's supplemental plea to dismiss Depp's defamation case against Heard after he lost the libel case in the U.K. 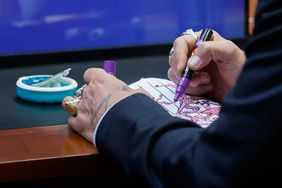