The Pirates of the Caribbean star, 55, left his Hollywood Vampires concert at the Tollwood Festival in Munich on Wednesday looking just like his character from the Disney franchise. Depp's wavy hair flowed out of from under his cap and he donned a black jacket, a deeply unbuttoned shirt and multiple long necklaces.

Aside from reprising the role of Jack Sparrow in 2017's Pirates of the Caribbean: Dead Men Tell No Tales, Depp occasionally shows up at the Disney ride that inspired the movie dressed as the infamous pirate, most recently doing so last April ahead of the latest installment's premiere.

Though the three-time Oscar nominee will appear next in City of Lies and London Fields, both out in September, he's touring through July 8 with Alice Cooper and Joe Perry as The Hollywood Vampires.

The latest shot of Depp comes as French media reported that his 16-year-old son Jack with Vanessa Paradis had "serious health problems." But on Thursday, a source told PEOPLE Jack is "fine and doesn't have a health issue."

As for Depp, a source tells PEOPLE "He will spend time with both of his kids once the tour is over in July," adding," "Johnny is doing great." 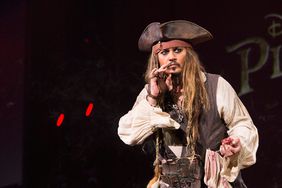