In the new trailer for Vacation Friends, Cena stars as Ron, who crashes the wedding of Marcus and Emily (Lil Rel Howery and Insecure Emmy nominee Yvonne Orji) alongside his girlfriend Kyla (Meredith Hagner) after meeting them in Mexico.

What starts as crashing their reception soon ends up being a wild and psychedelic-infused adventure where Marcus and Emily struggle to contain Ron and Kyla's party-going ways before their wedding.

In one hilarious scene, Ron and Marcus go on a hunt for psilocybin (a naturally occurring psychedelic mushroom).

"Jackpot. The devil's dick," Ron tells Marcus upon finding the mushroom. "The most potent mushroom on Earth."

Marcus, unaware of what the mushroom did, tells Ron, "I ate it."

"I didn't say eat it!" Ron replies, to which Marcus attempts to shift the blame back on him, "Man, everything you touch turns into drugs!"

This is the latest film Cena will star in with his already packed film slate. The actor and WWE wrestler already appeared in F9 and will star in James Gunn's The Suicide Squad in August.

Earlier this month, Cena surprised fans when he disrupted a WWE event to announce his return to the ring.

"I promise you this is not a one night only," the star said, adding that it's the "first night."

Vacation Friends begins streaming only on Hulu on August 27. 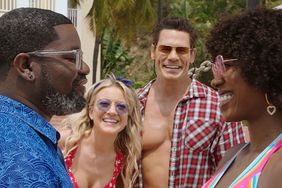