The Force Is with... Mother Nature: John Boyega Battling the Weather to Get to 'Star Wars' Premiere

"I actually NEED a pilot," John Boyega lamented on Twitter, revealing he was stuck in Atlanta, Georgia, ahead of the Star Wars: The Last Jedi premiere because of inclement weather

Is the Millennium Falcon available?

John Boyega is in a race against time — and mother nature — to make it to the Hollwood premiere of Star Wars: The Last Jedi on Saturday night.

The actor revealed early Saturday morning that he was stuck in Atlanta due to inclement weather —the Georgia city was hit with up to a foot of snow in some areas, grounding many flights.

The 25-year-old Brit added in a second tweet, “Cold! My thighs won’t even generate the heat anymore.”

He wrote in a third tweet, “Trying to get back for the L.A. premiere! I actually NEED a pilot !!!”

Luckily, it seems like the force is on Boyega’s side. According to Deadline, sources said that Boyega found a plane to get him out of the snow and straight toward Hollywood, just in time for the premiere at Shrine Auditorium.

In the Star Wars series, Boyega portrays Finn, a former Stormtrooper who becomes a part of the resistance. 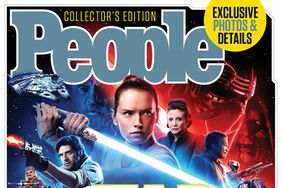