War Horse star Jeremy Irvine opens about starring as a young Pierce Brosnan in Mamma Mia! Here We Go Again, and why he's still "excited" for his new movie starring Kevin Spacey to be released

Jeremy Irvine is about to have a huge summer.

Despite the former House of Cards‘ actor’s involvement (the film was shot before the sexual harassment allegations against the Oscar winner surfaced), Irvine tells PEOPLE he’s still “excited” for James Cox’s film about rich kids gone bad to come out.

“What a lot of people probably don’t realize is just the number of people that are involved in making a movie,” he explains. “For one person to have some really awful accusations made against them, for that to take away from the other thousands of people who’ve poured their hearts and souls into something, that’d be a real shame.”

Mamma Mia! Here We Go Again — Meet the Young New Cast and See Who They Play

“I’ve only really been in the business for about seven or eight years, but the difference already that I’ve seen in the way the industry approaches you in auditions and on set — it’s had a real impact,” he says. “So it’s a good thing.”

To play a younger version of Brosnan’s character, Sam, in Mamma Mia! Here We Go Again, which splits its time between the past and the present, Irvine bonded with the former James Bond — but was “very conscious” not to mimic the star in his performance. “I didn’t want to do a Pierce Brosnan impression,” he stresses.

Still, he admits to being starstruck, explaining, “he was my generation’s James Bond growing up!”

“He was so incredibly warm and welcoming and I got to know him really well, which was great,” he adds.

Asked if he would ever consider playing the famous spy down the line, Irvine teases, “I don’t think there’s an actor in the world who would say no to that.” 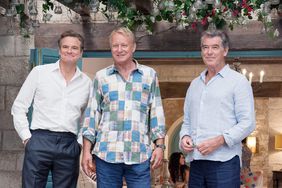