Jennifer Lawrence Leads an Entire Plane on a 'Fly, Eagles, Fly!' Chant Ahead of the Super Bowl

There’s no doubt who Jennifer Lawrence is rooting for on Super Bowl Sunday.

The actress made waves on Delta flight 1975 from New Orleans to Los Angeles on Sunday when she picked up the loudspeaker and led the plane in a chant in honor of the Philadelphia Eagles, who are taking on the New England Patriots in the big game.

“Everybody, this is not the pilot speaking. This is Jennifer Lawrence,” the 27-year-old Oscar-winner said over the loudspeaker. “It’s February 4th, Super Bowl Sunday, and we all know what that means. Can i please get a ‘fly eagles fly’? Fly, eagles fly! Fly eagles fly!”

One passenger was quietly sitting in her coach seat when she heard Lawrence’s voice come over the loudspeaker.

“I knew she was on this flight because I saw her at the airport,” the flyer tells PEOPLE.

According to the passenger, Lawrence’s fellow passengers loved her stunt.

“There were a few cheers,” the passenger told PEOPLE. But Lawrence’s time on the loudspeaker didn’t end there.

“There’s a colonial woman on the plane, she’s wearing traditional….” Lawrence continued, quoting the film Bridesmaids, while a flight attendant was spotted attempting to quiet Lawrence.

After Lawrence finished, “she went back to her seat and that was it. Everyone seemed fine as it was like, pretty quick,” the flyer tells PEOPLE.

See All the Celebrities at the Super Bowl!

“They certainly didn’t apologize, so I think they were fine with it,” the passenger continued. “It was just like a fun, spontaneous chant by Jennifer Lawrence that we definitely appreciated. I think everyone just went along with it, since flights are so boring.”

Lawrence went on to take photos with one young Eagles fan.

“Someone had an Eagles jersey on, and she took a selfie with them after,” says the passenger. “They asked her and she very happily said yes.”

Lawrence was in New Orleans to attend the Unrig the System Summit at Tulane University, where she spoke on Saturday evening.

She wasn’t the only person to send the Eagles good vibes while in the air. Pink — who is singing the National Anthem on Sunday — revealed that her own brother also led a similar chant on his flight to the big game.

“Yep. That’s my brother,” Pink wrote alongside an Instagram video. “Singing the Eagles fight song on his flight to Super Bowl. He’s not messing around people.” 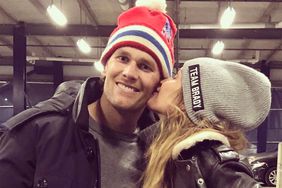 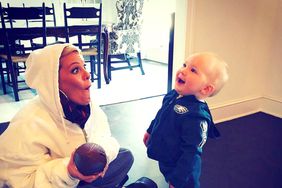