Jennifer Aniston’s ex-husband Justin Theroux had her take a little walk down memory lane when they started dating.

Aniston, who next stars in Apple’s The Morning Show with Reese Witherspoon, recently stopped by SiriusXM’s The Howard Stern Show where she looked back on her career, including her appearance in the 1993 slasher film Leprechaun. While the horror didn’t open to great reviews, it was Aniston’s first starring role in a movie and marked a huge turning point for the actress.

“I really thought I arrived when I did Leprechaun,” she told host Howard Stern. “It was with Warwick Davis, the guy from Willow was in it. It was a big deal!”

But while most actors prefer to never watch their early work again, Aniston was forced to revisit the movie when her ex-husband made her sit through it early on in their relationship.

“I watched it like, 8 years ago with our mutual friend Justin Theroux for s—and giggles,” she explained. “We were dating. It was one of those things when I tried to get that remote out of his hand and there was just no having it. He was like, ‘No, no, no, no, this is happening.’ I just kept walking in and out, cringing.”

The former Friends actress calls it a “cult classic” — and is still proud of starring in it.

“I really did think it was an amazing thing that I was in a movie,” Aniston said.

“In an effort to reduce any further speculation, we have decided to announce our separation,” they said in the statement in February 2018. “This decision was mutual and lovingly made at the end of last year. We are two best friends who have decided to part ways as a couple, but look forward to continuing our cherished friendship.”

They’ve since remained on good terms, with Theroux even wishing Aniston a happy birthday earlier this year. The actor shared a black-and-white photo of Aniston on Instagram carrying a horned statue above her head as she gazed down at the camera.

“Happy Birthday to this fierce Woman,” he wrote in the caption. “Fiercely loving. Fiercely kind. ….and fiercely funny. ❤️ you B.”

The Morning Show will debut on Apple TV+ on Nov. 1. 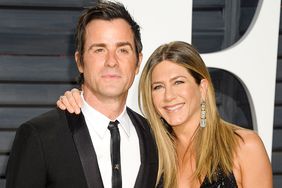