Aniston tells PEOPLE (The TV Show!) it'd be "nice" to date someone outside of Hollywood

Jennifer Aniston is keeping her options open when it comes to finding love.

The actress spoke to PEOPLE (The TV Show!)'s Kay Adams while promoting the second season of her Apple TV+ series The Morning Show when she was asked if she believed relationships between public figures and non-public figures could work.

"Of course," Aniston, 52, said. "Absolutely. I mean, it's happened. That's what I'm sort of hoping for is not necessarily somebody in the industry itself."

Aniston already debunked rumors that she and Friends costar David Schwimmer were dating, something she called "bizarre."

For more on Jennifer Aniston and other top stories, listen below to our daily podcast PEOPLE Every Day.

"I could not believe that, actually. Like, really? That's my brother! But I understand it, though," Aniston told Entertainment Tonight. "It just shows you how hopeful people are for fantasies for dreams to come true."

HBO Max's long-awaited Friends reunion revealed in May that there was a secret offscreen crush between Aniston and Schwimmer, who played Rachel Green and Ross Geller on the comedy series. During the special, host James Corden asked the cast if sparks ever flew in real life.

When Aniston suggested Schwimmer, 54, tackle the question, he admitted to having a "major crush" on her "but it was like two ships passing because one of us was always in a relationship and we never crossed that boundary. We respected that."

In June, Aniston spoke about her dating life in an interview with PEOPLE saying she would never try a dating app.

RELATED VIDEO: Jennifer Aniston Opens Up About Her Life Now: 'I'm in a Really Peaceful Place'

"Absolutely no," she said with a laugh when asked if she would ever use the apps. "I'm going to just stick to the normal ways of dating. Having someone ask you out. That's the way I would prefer it."

As for whether she would be interested in getting married again, Aniston says she's prioritizing being with a "fantastic partner."

"Oh God, I don't know," she said. "It's not on my radar. I'm interested in finding a fantastic partner and just living an enjoyable life and having fun with one another. That's all we should hope for. It doesn't have to be etched in stone in legal documents."

Aniston was previously married to Brad Pitt from 2000-05. She split from second husband Justin Theroux in 2018 after more than two years of marriage and nearly seven years together.

For now, the star said she is focusing on her work, her friends and her pets: schnauzer mix Clyde, pit-bull mix Sophie and newly rescued Great Pyrenees mix Lord Chesterfield.

"I'm in a really peaceful place. I have a job that I love, I have people in my life who are everything to me, and I have beautiful dogs," she said at the time. "I'm just a very fortunate and blessed human being."

The Morning Show returns to Apple TV+ this Friday. 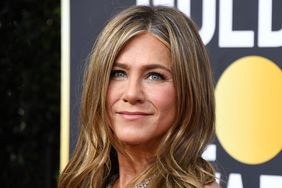 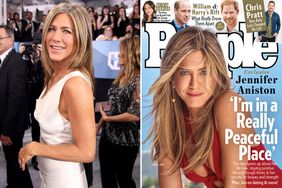 Jennifer Aniston Opens Up About Her Life Now: 'I'm in a Really Peaceful Place' 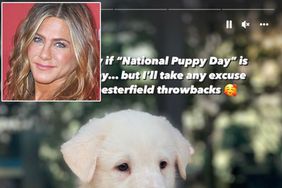 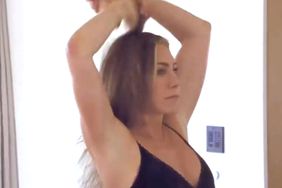 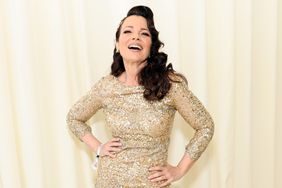 Jennifer Aniston Shows Off Gold Tassel Pants as She Thanks Fans for 53rd Birthday Wishes: 'Blessed'