Jennifer Aniston Agrees with Amy Schumer Saying 'We're All Hanging on By a Thread': 'Yes'

Jennifer Aniston and Amy Schumer are keeping it real.

"We're all hanging on by a thread, right?" asked Schumer, 39, with a text post on Instagram Thursday.

The Friends actress wasn't the only celeb to agree with the sentiment. Broad City star Ilana Glazer also commented, writing, "yes bb tytyty" along with a series of red heart emojis.

Jesse Seinfeld wrote, "That's a nice way of saying it," while singer Elle King joked that her thread was "used floss."

Schumer recently celebrated her son Gene's second birthday in a pandemic by writing a sweet note to her husband Chris Fischer.

Schumer posted a pair of throwback photos, one from the birth of her first child and another of Fischer holding their then-newborn.

"Today is our son's birthday and I woke up emotional as hell thinking about my husband, Chris. In this first photo while I was having a 3 hour c section he held my hand and stared in my eyes so I never felt alone," wrote Schumer. "I feel loved and supported always. He takes care of our family and is a husband and father beyond my wildest dreams. Also he has autism spectrum disorder."

Schumer revealed in her 2019 Netflix special Amy Schumer: Growing that Fischer had been recently diagnosed with autism spectrum disorder, discussing how the diagnosis strengthened their relationship in the HBO Max docuseries Expecting Amy.

"Being tested and diagnosed has helped us communicate and support each other better," Schumer wrote in her caption. "People have reached out to us saying that seeing our doc #expectingamy motivated them to get tested and that it has changed their lives. We want to encourage parents and people to give themselves the gift of information so people can function to the best of their abilities and remove any stigma that comes with autism." 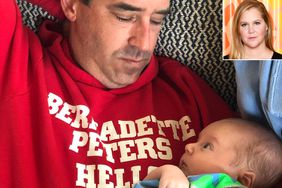