Jason Sudeikis and Olivia Wilde are going to have one ballin’ Valentine’s Day – literally!

The actor, 40, stopped by The Ellen DeGeneres Show on Wednesday and revealed the non-traditional plans he has for his fiancée.

“I mean, every girl’s dream – we’re going to go to the NBA All-Star weekend,” he said, adding that it’s in Toronto this year.

So why is Sudeikis forgoing the typical romantic candlelit dinner plans?

“I’m playing in the celebrity all-star game,” he explained. “It’s Americans versus Canadians.”

Although he played college ball, Sudeikis admits watching her man dribble up and down the court might be a bit of a letdown for Wilde, 31.

“I haven’t played basketball in over a year and half,” he said. “So it could be a swan-song for me. But we’re going to go up there and watch the dunk contest, the three-point, then watch the game.”

Turns out a love of basketball runs in the family. Sudeikis was recently spotted taking 21-month-old son Otis Alexander to a Clippers game, where the toddler looked to be having just as much fun as his dad.

“That was his first live basketball game, or as we call it ‘Hoops,”’ he told DeGeneres. “An NBA game for a two year old is actually pretty great. Every four minutes it’s something different – there’s t-shirt guns, dancers, little kid dancers, they’re throwing balls out.”

Sudeikis went on to gush over Wilde’s striking beauty, joking that people sometimes don’t even notice him when she’s nearby.

“She’s my invisibility cloak,” he laughed. “Nobody notices me when I walk in the room. They’re like ‘Oh my god, she has a stalker!’ ” 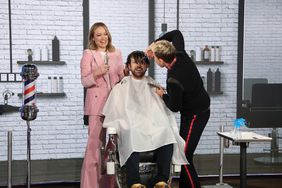