After being linked for six years, Jamie Foxx and Katie Holmes made their debut as a couple when they posed together at the 2019 Met Gala in New York City on May 6 — and broke up shortly thereafter, according to a source.

Though they didn’t walk the red carpet with one another, the actress, 40, and the actor/rapper, 51, took photos together inside the event. Holmes wore a custom Zac Posen gown, which she paired with a Tyler Ellis clutch and Lorraine Schwartz jewelry. Foxx donned a black suit with a skinny tie, sequin panther pin and purple shoes, which complemented his date’s dress.

The couple rode to the Met Gala with Posen, 38, and in videos on his Instagram story, the Dawson’s Creek star and the Beat Shazam host were seen lounging in the back seats of a bus as they danced and playfully held hands on the way to the fashion outing. The duo were joined by other celebrities who Posen dressed, including Andrew Garfield, Nina Dobrev and Julia Garner.

Shortly after publicly posing together for the first time since they were spotted dancing together in the Hamptons in August 2013, the ultra-private couple called it quits.

“Jamie and Katie split,” a music entertainment source told PEOPLE on Monday. The couple parted ways in May.

In April, a source told PEOPLE that Foxx and Holmes were trying to make time for each other as much as possible. 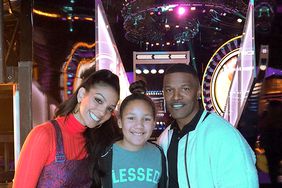 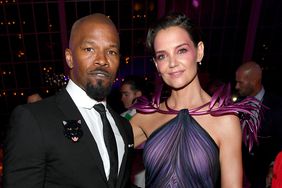