The actor's wife Jada Pinkett Smith honored her husband's birthday Saturday on Instagram with an artsy photo grid of the Gemini Man star.

The grid is comprised of 12 separate photos that together show Smith casually seated on a wooden bench in front of a colorful arch painted on the wall behind him.

Pinkett Smith, 50, tossed a crown reminiscent of Basquiat's iconic paintings atop her husband's head to finish off the central photo.

The Red Table Talk co-host celebrated her own milestone birthday last week with a special night at a roller rink. Among the attendees at Pinkett Smith's party were Jaden Smith, Trey Smith, Jordyn Woods, Karl-Anthony Towns, and Lauren London.

During a star-studded episode of Red Table Talk on Wednesday, Pinkett Smith's co-host Bethenny Frankel, who is also 50, advised her friend "to take a breath" and "take a second" to think before acting. "Just think about it and digest it."

In an episode of the Facebook Watch show that aired shortly before her 50th birthday, Pinkett Smith broke down what she considered "the most beautiful part of almost turning 50" — being enough for oneself.

"Coming into the last four years for me has really been about that transformation about coming to the self and having acceptance for the self and having to go through many different kinds of personal journeys; to come to that place of really grounding myself in that understanding," she explained. 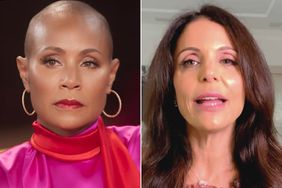