Get a sneak peek at Woody Allen's latest all-star ensemble film, out July 17

Emma Stone has a new love interest – on-screen at least.

PEOPLE and Entertainment Weekly got an exclusive first look at the Oscar-nominated actress, 26, as she crushes on her costar Joaquin Phoenix in the new Irrational Man trailer.

“There was no question there was something lighter about Abe … my thoughts were very mixed-up and troubled,” Stone’s character says in the trailer as she reflects on her alcohol-abusing, convoluted teacher.

And costar Parker Posey describes the actors’ chemistry as “wonderful.”

“Working with Joaquin and Emma, they were both great,” says Posey.

“I don’t know if I can even tell you my thoughts about it without revealing things,” says Posey, 46, of the film. “It’s amazing for Woody to have made so many movies and still surprise audiences. He’s a maestro. He’s amazing.”

For more on Irrational Man, pick up the new issues of PEOPLE and Entertainment Weekly, on newsstands Friday

From Superbad Sweetheart to SAG Superstar: See How Emma’s Changed 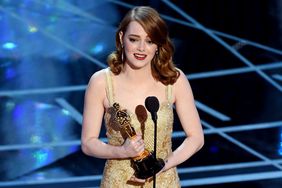