Michelle Pfeiffer‘s return to the spotlight is a welcome one.

This year the three-time Oscar nominee — who turns 60 on Sunday — and perennial beauty icon starred as Ruth Madoff with Robert De Niro in HBO’s Wizard of Lies, tormented Jennifer Lawrence in Darren Aronofsky‘s creepy thriller mother! and played a mysterious widow in Murder on the Orient Express. Next up is a major role in Marvel’s Ant-Man and the Wasp, out this summer.

“She’s a beautiful actress in all senses,” her Orient Express director Kenneth Branagh tells PEOPLE, noting she can have fun with a sexy character but “turn on a dramatic dime and reveal the pain underneath.”

Pfeiffer admits last year’s “comeback” is a bit of a scheduling accident and that any perceived acting breaks were due in large part to her not wanting to be away from her family for too long. “I’m an empty nester now,” she told Interview. “I’ve never lost my love for acting. I feel really at home on the movie set. I’m a more balanced person, honestly, when I’m working. But I was pretty careful about where I shot, how long I was away, whether or not it worked out with the kids’ schedule.”

The actress’s path to stardom began in her hometown of Midway City, Calif., where Pfeiffer enjoyed a “rough-and-tumble” childhood. “I was a tomboy,” she told PEOPLE in 1999. One of four children of Dick Pfeiffer, an air conditioning contractor, and his wife, Donna, Pfeiffer dropped out of Golden West College after a year to enter a beauty contest. After being crowned Miss Orange County in 1978, she moved to L.A. and landed her first starring role in Grease 2. It was her sultry turn opposite Al Pacino in 1983’s Scarface, however, that put her on the map.

Long-considered one of Hollywood’s most iconic beauties — and the cover star of PEOPLE’s first Most Beautiful issue — Pfeiffer has said she didn’t really start taking care of herself until her 40s. “I smoked cigarettes, ate whatever I wanted and used bar soap on my face. People were horrified,” she said. Now all she cares about “is that I’m able to age gracefully and that I don’t ever look like a wax figure of myself.”

Last year marked her 24th wedding anniversary with writer-producer David E. Kelley (Big Little Lies), 61, who she met on a blind date two months before she adopted her daughter Claudia Rose, now 24. They also have a son, John Henry, 23.

As her kids grew up, Pfeiffer “took for granted how nice it was to not be under the spotlight,” she told the New York Times. “I remember thinking, ‘Do I really want to step back into [acting]?’ And I just realized that I’m not done. I have a lot more to do and a lot more to say. I’m never going to be one that retires.” 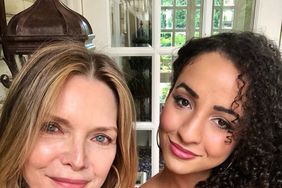 Michelle Pfeiffer Shares Sweet Photo with Daughter Claudia: 'Out on the Town with My Girl'