Inside George and Amal Clooney's Romantic (and Delicious) Trip to Cannes

You can trust George and Amal Clooney to seek out the finer things in life – from Lake Como to the south of France.

While in Cannes to promote his new film Money Monster, the actor, 55, has been showing his wife, Amal, 38, some of his favorite french locales.

First up, the legendary H tel du Cap-Eden-Roc. The couple stayed at the luxurious resort, which served as the inspiration for F. Scott Fitzgerald’s Tender Is The Night, and has one the most beautiful views of the Mediterranean.

The Clooneys have also indulged in some fine dining on the very romantic Plage Keller a private beach on the French Riviera that includes two upscale restaurants.

On May 11, they feasted at Le Bacon a favorite spot for George who has previously dined there.

According to a restaurant source the couple wanted, “a very small table in the corner. It was an intimate party of five and most of the other guests didn’t even recognize them.”

WATCH: What is George Clooney And Julia Roberts’ Chemistry Like?

Before saying au revoir to Cannes, they also stopped at Le Cesar for an intimate dinner where they shared the house specialty – spaghetti flamb in cognac.

“They were kissing at the table and looked very much in love. She’s very beautiful in person,” says a restaurant source before adding, “and so is he.” 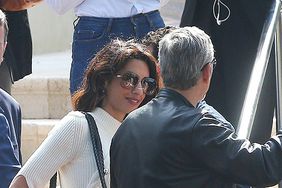