The real story behind ski jumper Eddie Edwards, who inspired Eddie the Eagle

In the film, Taron Edgerton (The Kingsman) stars as Eddie Edwards, a penniless, clumsy plasterer who rose to international fame during the 1988 Calgary Olympics as the first British ski jumper to compete in the Winter Games.

Although he would finish dead last in every event, Edwards’ extreme underdog status endeared him to millions, and proved that anyone, regardless of social or economic standing, could compete at the highest levels.

Finding His Wings
While the film portrays Edwards as a novice skier, the real-life Eddie did have some experience as a trick jumper, sailing over cars and buses like a low tech Evel Knievel, according to The Hollywood Reporter.

He was no slouch as a downhill skier either, and initially hoped to enter the Olympics as such. But after moving to Lake Placid to train, Edwards quickly realized the cost of competing. “I didn’t have much money, so thought I’d better find something cheaper to do. I went along to the ski jumps and thought: That looks all right,” he told The Guardian.

But with no financial support, and no ski jumps in all of Britain, Edwards borrowed a car and some cash from his parents and drove through Europe, competing in various trials. In 1986, he broke a British record jumping 68m in Switzerland.

Edwards supported himself working odd jobs like babysitting and cutting grass, and found bargain lodging at Finnish mental hospital for 1 pound a night – accommodations his critics would later find amusingly appropriate. It was in his cot at the asylum that Edwards learned he had qualified for the team.

In the film, Edwards gets whipped into Olympic shape in Germany, where he meets the fictionally composited character of Bronson Peary, a onetime great American skier played by Hugh Jackman.

The real-life Eddie, however, was trained in America by two respectable coaches – but that didn’t make his journey any easier. His shoestring budget made preparations both difficult and dangerous. Getting his second-hand boots to fit required six pairs of extra socks, and his ill-fitting helmet was strapped on with string, according to The Guardian.

His physical limitations made matters worse. Edwards’ farsightedness required him to wear glasses while jumping, which tended to get fogged up midair. “Sometimes I take off, and I can’t see where I’m going,” he once said.

The Eagle Has Landed

When the 24-year-old arrived in Calgary, his underdog story was already charming journalists and fans alike. Waiting for him outside the airport, a fan club toted a banner that read: “Welcome to Calgary, Eddie the Eagle.”

But his first encounter with the press quickly earned Edwards another nickname: “I walked towards [the banner] but the automatic doors had been turned off, so I walked into the glass and my skis bounced off the doors, everything broke and I became Mr. Magoo,” he later remembered.

Despite murmurs from athletes and journalists that Edwards’ participation was making a mockery of the games, the Eagle valiantly defended his right to compete. “Where is it written that the Olympics are only for winners?” he said at a press conference.

Edwards was greeted with raucous applause when he appeared at the top of the ramp for his first jump. After repeating his mantra, “May I survive and come through this intact,” he launched himself through the air – ultimately landing a full 16m behind his closest opponent.

He would also finish last in his final two jumps, but the fact that he was able to survive the events, and even beat his personal record along the way, was ample consolation to both Edwards and his supporters. At the closing ceremonies, the games’ chief executive mentioned him in a speech: “You have captured our hearts. And some of you have soared like eagles.”

Crash Landing
As Edwards’ popularity and media presence began to border on overkill, his detractors grew louder. He was dismissed as a “clown” by East German newspaper Junge Welt, who asked, “Where would the Olympic Games go if the Eddie Edwards of this world took their place in every discipline and so discredited the sporting achievements of all those who far outstrip them in ability?”

Edwards still had his supporters, like one Times writer who fired back, “Don’t condemn him for taking part in the Olympics and doing his poor best in them. Are modern Olympics not for the taking part, but for the winning.” Yet in 1990, the Eddie the Eagle Rule was ratified by the International Olympic Committee, imposing harsher qualification rules. Edwards would never return to compete in the Olympics.

Don’t Call Him a Loser
“What annoys me is when the papers call him a loser. Eddie’s anything but a loser,” Edwards’ wife, Sam, told The Guardian in 2007. “Would a loser compete in the Winter Olympics even though he had no sponsorship? Could a loser come from a country where there are no ski jumps and yet compete at the highest level? I think not.”

In fact, the only thing Edwards lost at the Calgary Olympics were the games. Through various endorsement deals and appearances, Edwards claimed to have made between 500,000 and 600,000 pounds in 1988. Unfortunately, he would declare for bankruptcy just four years later, claiming his funds had been mismanaged.

Edwards eventually went back to construction work, but a steady stream of lectures and motivational speaking gigs, not to mention the sale of the film rights to his story, allowed Eddie, his wife and two children to live comfortably.

His heroic failure back in 1988 remains a part of Britain’s Olympic folklore, and the success of Eddie the Eagle promises to spread the message that hard work and perseverance, even in the absence of wealth, can yield greatness. 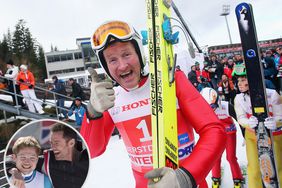 The Real 'Eddie the Eagle' Reflects on His Improbable Calgary Moment: 'Getting to Those Olympic Games Was My Gold Medal' 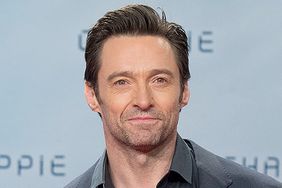 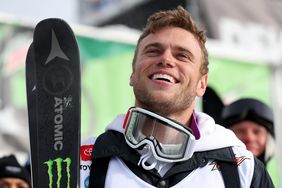 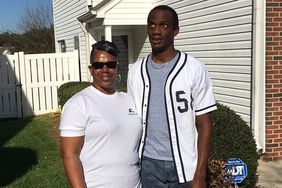