Earlier this month, Gwyneth Paltrow made headlines when she revealed she and husband Brad Falchuk only live together four nights a week

The actress and Goop creator, 46, was spotted sightseeing in Florence, Italy, on Monday alongside husband and American Horror Story producer Brad Falchuk, 48.

Photographers caught the pair smiling and taking pictures themselves before they stopped for a meal at renowned eatery Trattoria Cammillo, where they sipped white wine, ate pasta, and held hands.

Paltrow was dressed for the warm weather in a black-and-white two-piece floral pattern ensemble by La DoubleJ x Goop, made up of a $495 boy silk button-down shirt and matching boxer silk shorts. (Fittingly, its pattern, according to Goop’s website, was “inspired by Italian majolica tiles” and when paired together, the top and bottom “make you feel like you are on vacation in Italy,” according to fashion and interiors stylist Lawren Howell). She kept her blond locks pulled back in a braid and paired the look with $395 Alexandre Birman leather white sneakers, adored with the designer’s signature black bow details.

Earlier this month, Paltrow made headlines when she revealed she and Falchuk — who tied the knot in September — only live together four nights a week, after which he goes back to his own house.

“Oh, all my married friends say that the way we live sounds ideal and we shouldn’t change a thing,” Paltrow said in an interview with The Sunday Times.

She elaborated on the trip in January, calling it a “very modern honeymoon” on Live with Kelly and Ryan.

Of course, Paltrow also turned heads when she and the Coldplay frontman, 42, announced their split in 2014 after 11 years of marriage with a famous statement declaring they were “consciously uncoupling.”

In the years since, the pair, who share 15-year-old daughter Apple and 13-year-old son Moses, have remained close.

Meanwhile, Paltrow and Falchuk have been making the most out of their first year of marriage. The two dated for more than three years before marrying in a private, star-studded wedding ceremony in the Hamptons.

Back in January 2018, Paltrow raved about Falchuk in Goop magazine’s Sex & Love issue, calling him the “man I was meant to be with.” 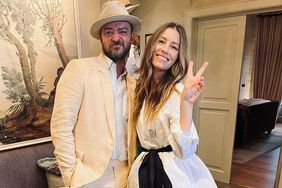