Gwyneth Paltrow is so in love with husband Brad Falchuk!

The Goop CEO, 46, celebrated Falchuk’s 48th birthday with an Instagram tribute on Friday. Gushing about her husband, Paltrow wrote that Falchuk is her “rock” and “true north.”

“It’s your birthday, but it’s really feels like you are the gift,” Paltrow began. “Not just to me, and to @izzyfalchuk and Brody, but to all of us who are fortunate enough to know and love you.”

“You are my rock, my true north, my favorite person to eat with, to travel with,” the actress continued. “You are a true friend. You want only what is for the highest good. You always help me see what I can’t. I am so happy you were born @bradfalchuk I love you so much.”

The couple married in the Hamptons in late September 2018 in an intimate ceremony at Paltrow’s house, where friends and family celebrated their love. Paltrow confirmed the news with a sweet shot of the two showing off their wedding bands on Instagram the day after the ceremony.

Guests were first treated to a cocktail hour and string quartet before they were led to another tented area, a source told PEOPLE at the time.

Paltrow and Falchuk then exchanged vows under an archway decorated with greenery. After, attendees “cheered and clapped,” according to the source.

“The whole wedding seemed very intimate and romantic,” the source added. “The friends that attended are all people that love them. Throughout the reception, guests laughed and you could tell everyone had a wonderful time. It was truly a beautiful wedding.”

Paltrow was previously married to Chris Martin for 11 years before “consciously uncoupling” in 2014. They share two children together: 14-year-old daughter Apple, and 12-year-old son Moses. 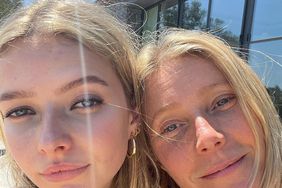