From Yale to' Black Panther' : Winston Duke on Playing Fan Favorite M'Baku and What's Next

"As a child I would watch Frasier a lot," says Winston Duke of his early acting inspiration

The 31-year-old actor had a couple of TV roles under his belt pre-Panther, but is quickly becoming a fan favorite alongside his other fellow breakouts Letitia Wright and Danai Gurira.

Here are five things you need to know about the breakout star, including a special musical talent and where you can see him next.

Duke, who was born in Trinidad and Tobago and moved the the U.S. at age 9, recently told PEOPLE that he knew he wanted to get into acting when he was a kid, and that a particular American TV show inspired his theatrical spirit.

“As a child I would watch Frasier a lot and there was one episode with Derek Jacobi, where he was playing this Shakespearean actor that was a terrible Hamlet,” Duke recalls to PEOPLE. “And he reenacted the performance, and for days I went on, I’d perform and do that, and I knew I wanted to do something kind of like that as a kid for awhile.”

His agents pranked him with his Black Panther casting news

Duke’s audition process was quicker than expected, and he didn’t receive the good news about landing M’baku in a traditional way.

“My agents love pranking me, so they called and were like, ‘You really need to sit down for this. We’ve got some bad news,'” he says. “And then they’re like, ‘You got it! You got it! Are you there? Can you hear us?’ Because I went quiet, just dead quiet on the phone. And kinda started sobbing because it meant so much.”

*Bonus fact: He did most of his own stunts, in 20 pounds of costume

Duke proudly reveals that he did most of his own stunts in the film and that the final fight sequence was his favorite to film.

“The fight scene at the end of the film was so fun,” he says. “Everyone is there with all the explosions, just it being so involved was incredible.”

Duke spent a solid hour and a half in makeup and wardrobe in order to properly affix his character’s body art and armor.

“We’d put on tribal tattoos, the Jibari tribal tattoos on the arms, the chest, and then put on the 20-25 pounds of armor,” he says. “It’s a pretty heavy costume. I always felt like a tank.”

Duke and Nyong’o met years ago while attending the Yale School of Drama and coincidentally enough, went to see Marvel’s most-talked about movie in 2012 together.

“We saw the first Avengers movie together,” Duke says. “And had wondered if we’d ever get to a be in a movie like that — such a big budget, crazy vehicle with special effects and tons of funny, cool people that you admire. And we were just like ‘Yeah, I don’t know if that’s ever going to happen.’ And then for this to be my first movie, her first Marvel film, we were like ‘Can you believe that happened? Do you remember Avengers in New Haven, Connecticut?'”

Black Panther’s Danai Gurira Breaks Down That Wig-Throwing Scene: ‘I Loved It from the Minute I Read It’

He is a great beatboxer

If this acting thing doesn’t pan out for Duke, he has solid rhythmic skills on which to fall back. Take a listen to him beatboxing for costar Letitia Wright during some downtime during filming — thanks to the behind-the-scenes videos Nyong’o recently shared on Twitter., aka “The Birth of MC Baby Underbite,” parts one and two:

His next movie is another big blockbuster

Duke’s scene-stealing M’baku will be back on the big screen sooner than you think, in Avengers: Infinity War, which they were filming at the same time as Black Panther in Atlanta.

“We were going back and forth [between sets],” says Duke. “It was a lot of busy scheduling, but a lot of fun.”

So what does he get to do in Infinity War?

“I can’t say anything about that!” he says with a laugh. “All I can tell you is Black Panther sets up the MCU to go in a really wonderful new direction. Sets up a new language, a new world for the MCU to play in and that construction is then rocked to its core when Thanos enters in Infinity War — get ready.” 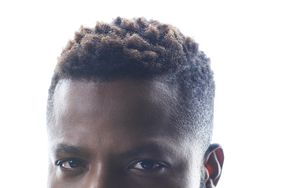