It's time to let the women of The Fast and the Furious take the lead!

F9 cast members Jordana Brewster, Ludacris, and Tyrese Gibson revealed on Monday they're ready for the many female characters who have sped through the franchise to get a female-led film of their own.

"The girls need a spin off," Ludacris, 43, declared on SiriusXM's Town Hall hosted by Jess Cagle and Julia Cunningham. "That's what needs a spin off. All the bad ass, kick ass women that are in this film, that's who deserves it."

Brewster — an OG female lead in the franchise — said, "That would be awesome. I've heard those rumors. I think that would be incredible."

"Also, think about all the people we could bring back, right? We could bring back Eva Mendes, who'd be incredible to work with," the actress, 41, continued. "There's Helen Mirren, Charlize Theron, really thrown Nathalie [Emmanuel], me and Michelle [Rodriguez]."

Brewster added, "It would be really, really cool. So, I can't speak to the discussions, but I think it would be awesome. So, fingers crossed."

Over the years, several women have been highlighted in the franchise including Brewster, Rodriguez, 42, Mirren, 75, Mendes, 47, Theron, 45, Emmanuel, 32, Nathalie Kelley, Gal Gadot, Ronda Rousey, and more.

Back in May, Rodriguez revealed in a celebration of the Fast franchise's 20th anniversary with Entertainment Weekly that she asked for rewrites in the first film, 2001's The Fast and the Furious, due to the lack of depth of her character.

"It was a reality check for them to realize that the streets don't work like that. You don't just get with a guy because he's hot. There's a hierarchy there. Can that hot guy get beat up by who you're dating? If he can, then you don't date him, because why would you want to lose the hierarchy?" Rodriguez explained.

Brewster confirmed, "When Michelle read her role, she was like, 'No, I'm not playing that.' And then she changed it completely. It went from a trophy girlfriend to this really layered character."

Meanwhile, ahead, of the F9 premiere on June 25, cast mates have also been reflecting on their late co-star Paul Walker.

"Always miss him, carrying on his legacy," Ludacris said during SiriusXM's Town Hall, which will debut on June 22 on the SXM app.

He also shared that Walker's daughter Meadow, 22, and brother Cody Walker were always on set to consult the film and discuss how "his legacy can be incorporated."

"He's present spiritually at all times. And man, we miss him in the physical and in the spirit. Believe that every day," the rapper said.

Brewster added, "I think Chris [Morgan] put it beautifully when he said Paul's presence is always with us and we always want to honor his legacy. And I think it's a beautiful thing that Brian's still alive within our universe."

"I always want to do him right," the actress declared. "That is something I don't take lightly." 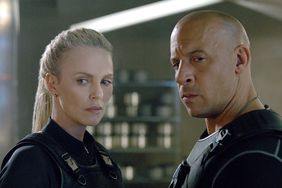