Amy Schumer is rocking serious confidence in her new movie.

The Trainwreck and Snatched actress next stars in I Feel Pretty — and PEOPLE has an exclusive first look! The movie follows Schumer as an insecure woman who suddenly believes she is the most beautiful and capable woman on the planet after waking up from a fall.

I Feel Pretty marks the directorial debut for writing partners Marc Silverstein and Abby Kohn, who are best known for writing romantic comedies like He’s Just Not That Into You and How to Be Single. The two tell PEOPLE why Schumer was the perfect fit for the role.

“Amy’s comedic genius — a word we do not use lightly — made her an obvious, perfect fit for this role and our ultimate dream casting for Renee,” the directors tell PEOPLE in a joint quote.

They continued, “But equally important for this role was Amy’s ability to give herself over to this part completely and show us a vulnerability that I’m not sure she’s fully shown before. We’ve all seen her fearlessness in her comedy but she is also fearless about exposing different sides of herself with a rawness that immediately draws everyone in.”

Philipps and Williams’ casting is special as Philipps is married to Silverstein and the two are close to Williams. This also marks the best friends’ first onscreen pairing since Dawson’s Creek.

Campbell and Williams sit side-by-side in one of the exclusive stills, with Williams rocking longer hair extensions than her usual locks.

But the movie isn’t a typical romantic comedy. The two writers wanted to put a spin on the genre that harkens back to other great comedies.

“Studios aren’t making many romantic comedies of any kind — so there really isn’t much of a current batch! Which leaves people, I think, hungry for smart, funny movies that are actually about something, and rooted in characters and relationships that they can relate to,” they say. “And truthfully, we don’t really see this as a rom com – but because we have a female lead it tends to get categorized as such. We see it more like a throw back to high concept comedies like Big or Tootsie — but made modern by deliberately leaning into some of the tropes of those movies in order to upend them.” 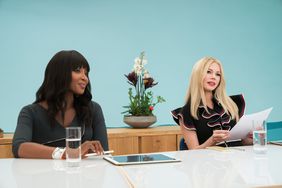