"Of all people to be sitting next to at that kind of a show, whoa," Emma Stone recalled

Emma Stone is recalling being starstruck at her first Golden Globes — thanks to the Hollywood presence of Angelina Jolie and Brad Pitt.

On Monday night's episode of The Tonight Show, the 32-year-old actress looked back on attending the 2011 Golden Globes for the first time, telling host Jimmy Fallon,"I went with my mom. That was my first time going to the Golden Globes. It was very, very, very exciting and so I took my mom with me."

And at the time, the Easy A star truly got the A-list experience, then revealing how she and her mom were seated next to none other than Pitt and Jolie.

"We were like, ‘Of all people to be sitting next to at that kind of a show, whoa,'" she explained.

The story took a hilarious turn when Stone recalled her mother drinking some champagne and trying to make "small talk" with the famous duo.

"My mom never drinks, and she had champagne that night, which was, you know, probably not the best idea, but she was having a wonderful time," The Favourite star said. "And she started asking Angelina Jolie, like, ‘Do you have kids?… What do you guys [do]?’"

"I was like, ‘You have got to be out of your [mind].’ She completely knew, but she was, like, making small talk about the kids," Stone laughed.

And while the actress will always remember her Golden Globes chat with Jolie and Pitt as a milestone moment, the La La Land star recently celebrated a new life milestone: marrying longtime love Dave McCary.

A source confirmed to PEOPLE in September that the Oscar-winning actress and Saturday Night Live segment director had officially tied the knot. They first announced their engagement on his Instagram in December 2019.

The confirmation of their nuptials came two weeks after Stone was spotted wearing matching rings with McCary while on a walk together in Los Angeles on Sept. 11. 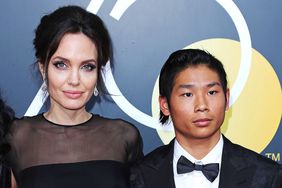