The sequel for hit teen movie After is adding another big heartthrob.

After We Collided, the second movie planned in the After franchise based off the Young Adult (YA) books, follows Tessa and Hardin's recently ruptured romance as a new suitor causes tension.

The movie picks up after Josephine Langford's Tessa and Hero Fiennes Tiffin's Hardin have broken it off. Dylan Sprouse's Trevor arrives to try and woo Tessa away from her all-consuming love for Hardin — even after he betrayed her.

"The entire world is a collection of memoranda that she did exist and I that I have lost her," Hardin narrates at the beginning of the trailer. "This is our story, Tessa's and mine. We're like an addiction to each other with equal parts pleasure and pain."

But after Hardin begs Tessa for another chance, Tessa meets Trevor at her publishing internship and the sparks fly.

"Hardin Scott? I didn't peg you as the bad boy type," Trevor says after the two spend the night together and Hardin barges in to find them.

"Trust you? Where has that ever gotten me?" an emotional Tessa responds.

The trailer then flashes a series of steamy scenes, with Tessa seemingly torn between Trevor and the heavily tattooed Hardin.

"This thing between you and Hardin, it's not gonna end well," Trevor tells Tessa as the trailer hints at a car accident.

The first movie came out in April 2019, making stars out of Langford and Fiennes Tiffin.

As fans of the series are aware, After was originally written as fan-fiction with Harry Styles as the main character, who later evolved into Hardin. The movies take Hardin in a different direction with Fiennes Tiffin portraying him.

“I feel like the character is so separate from that now and is his own thing,” Fiennes Tiffin told PEOPLE before the first movie's release. “I don’t actually know anything about Harry Styles in terms of how he is, I felt no need to delve into those aspects. The original source of inspiration was drawn from him, but I don’t think we’re by any means trying to duplicate his life or anything. It’s very much a separate story with a separate character.”

After We Collided hits theaters and on demand on October 2, 2020. 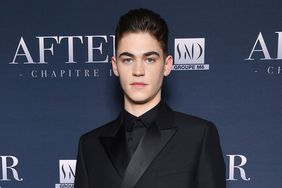