"I always say it’s nice to be important, but it’s more important to be nice," the Red Notice star said of the good deed

Dwayne Johnson is opening up about paying it forward.

Rodriguez "collapsed to the ground as he read a card I wrote to him that said, 'Thank you for your service, brother and enjoy your new truck,' " Johnson wrote on Instagram Thursday.

"On Thanksgiving he deserves a helluva lot more than just me giving him my personal truck. I always say it's nice to be important, but it's more important to be nice," he said. "And Oscar, exemplifies being nice and kind to his core."

In a previous post, the actor explained that in addition to treating fans to a screening of his new Netflix movie Red Notice, he also wanted to do "something BIG… something MASSIVE…something unforgettable."

With that inspiration, Johnson's "original idea was to give away the Porsche Taycan, that I drive in the movie... So we reached out to Porsche, but they said no. But I still said, yes 😉 I'll do one better. I'll give away my personal custom truck as the gift. My baby 😊."

After gathering info about everyone in the audience at the special screening, the Jungle Cruise star said he was most moved by Rodriguez's story. A personal trainer, leader in his church, caretaker for his elderly mother and provider of meals for women who are victims of domestic violence, Johnson said he knew Rodriguez was who he wanted to gift his slick black pickup.

As seen in a candid carousel of photos, the shocking surprise overwhelmed Rodriguez, who crumpled with emotion next to the truck.

"He got up off the ground and launched into giving me the biggest heartfelt hug once he gathered himself and stopped hyperventilating," Johnson said. "Then we FaceTimed his girlfriend … to let her know he's picking her up in a new whip."

Reflecting on his new friend's reaction to the reveal, the Jumanji star said, "It's the little things like this, that I get the greatest joy out of. But most importantly, I have the global platform to illuminate good, solid, grateful human beings, like Oscar." 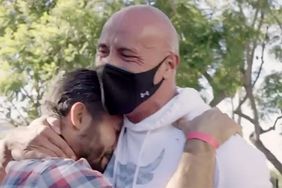 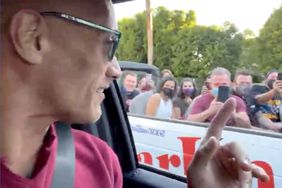