Barrymore stresses her sweet successes not failures to PEOPLE: "I'm doing my best!"

Drew Barrymore recently separated from husband Will Kopelman. But the mother, actress, business mogul, purveyor of beauty products and fine wine, appeared to have her sweet disposition and good humor back during Godiva’s 90th Anniversary fete at The Marlborough Gallery in West Chelsea on Friday evening.

And, although she was wearing heels, figuratively speaking, her two feet were planted firmly on the ground. “Next year is going to be really exciting!” she told PEOPLE.

Barrymore, 41, was wearing a demure black dress paired with a rectangular black lacquer bag by Edie Parker that read “Frankie” on one side and “Olive,” on the other, in silver – an endearing nod to her two young daughters. She later posed with Godiva’s 90th anniversary box on the red carpet.

“I’m going to be the person with the [logo] sweat band, the t-shirt, the purse, the tattoo – I’m going to look crazy at some point,” Barrymore joked.

“When we asked how her daughters are holding up, an ebullient Barrymore answered, “They’re so awesome. They’re the most delicious. Frankie went to a doctor’s appointment today. Nothing bad, the common cold. Olive had a play date with her friend from school, and her mom is a friend of mine, so we had a nice girly morning. And then Olive came with me to a doctor’s appointment, because she just wanted to hang out. We like to lie in bed and talk. We did all of that.”

Barrymore also revealed the details of her heartwarming recent Mother’s day with her girls and Will Kopelman’s family. “The [girls] made me an amazing card and they brought me flowers, which was so nice,” she said of Frankie and Olive. “Funny enough, I was trying to scramble to get ready and we all ended up sitting on my bathroom floor and reading each other s cards. It was sooo nice!”

They also spent a good part of the day with the Koplemans, her former husband Will s nuclear family. “We were here at my in-laws Country Club,” indicated Barrymore. “Just hanging out all day and then we went to an art fair together. It was great. I’m absolutely as close with them as ever. Because we were close, we will remain close. We re a family forever.”

We also asked if she also had time to catch up with her mother, Jade Barrymore. “Yeah, I texted with her and we talked,” she said. “And I put a picture of her and I from 1982 up on my Instagram that I just thought was an hilarious, amazing image. Yeah, very positive.”

As Barrymore had also posted an image of Coco Kopleman, Jill Kargman, Will’s sister, and herself we also inquired about her ongoing relationship with Kargman. “She’s my sister for life,” answered Barrymore.

Barrymore also spoke highly of their recent collaboration on Jill s scripted Bravo television show, Odd Mom Out. “We had the best time,” she indicated. “I kept saying, if you ever want me to come around? But she waited until season two, and then she gave me the script, and I said, ‘Let me see if I connect with it, or if I can bring something to it.’ And I loved it, I loved the whole episode, and so it was off to the races.” Barrymore plays Kargman’s Park Avenue neighbor.

PEOPLE mentioned to Barrymore that Kargman had said of Barrymore’s relationship with life on Park Avenue, where Barrymore has actually been living, that she gets it “with a wink.”

“I just think Jill has a voice and a sense of humor and an outlook that is a trifecta,” said Barrymore. “And I think it’s very commercial in its irreverence and the way she poses herself as feeling small at times – that’s so much larger than life.”

As PEOPLE pointed out that Barrymore appeared happy and seemed to already be moving on with life, she told PEOPLE, “Thank you. I’m doing my best. I’m going back to work for the first time in a while to do this Netflix show,” she said. “I’m not supposed to give away details about the roll, but I’m excited. It’s going to be fun. And then we re just doing a lot with Flower beauty, doing more international, we re in two or three new territories and growing. And our Rosé comes out this spring, and we’re selling out. It’s gone. I’m so excited about that.

“Next year is going to be really exciting,” she offered.

And is Barrymore a chocolate devotee? “Oh, yeah,” she told PEOPLE with a laugh. “And Olive is the biggest chocolate person. She’s a chocoholic. I did a collaboration about hearts with Godiva for my book [of photography] Find it in Everything(1994). I really like the company, and Olive loves when I bring home chocolates. So it’s very positive.” 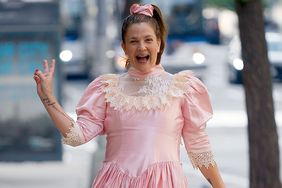