The two were spotted getting cozy in Tulum, Mexico, over the weekend as they packed on the PDA during a leisurely stroll

The Mexican actor, 37, was spotted getting cozy with British model-actress Suki Waterhouse, 25, in Tulum, Mexico, on Saturday as they packed on the PDA during a leisurely stroll. Holding hands and keeping a close eye on each other, the casual couple took in the natural sights as they sipped on drinks and enjoyed the tropical weather.

The pair kept their look low-key, with Waterhouse opting for a see-through purple top and black shorts while the actor sported a blue button-down shirt with a pair of long beige shorts.

The romantic outing isn’t the first time the pair have been spotted getting cozy. They were seen sharing a kiss on the streets of London back in the summer of 2015.

Luna was previously married to actress Camila Sodi for five years before their divorce in 2013. The former couple share two children — 8-year-old son Jeronimo and 6-year-old daughter Fiona — and remain friendly: They brought the whole family out for the Rogue One premiere last November.

Waterhouse was previously linked to Bradley Cooper, 42, for two years until their breakup in the spring of 2015.

The getaway comes as a relaxing break for the actor after a whirlwind few months filled with press stops and public appearances for Rogue One. Luna also made a charming appearance at the 2016 Golden Globes the weekend prior, where he presented alongside costar Felicity Jones with a cheeky bilingual speech, mixing in some of his native Spanish while announcing the award. He earlier walked the red carpet with good pal and best actor nominee Gael Garcia Bernal.

Featuring the most diverse cast yet, Rogue One has been a blockbuster success, with Luna playing a pivotal role as a captain helping to lead a band of rebels. The actor previously opened up to PEOPLE about the casting process and how he almost accidentally screened the call that changed his life.

RELATED VIDEO: ‘Rogue One’ Star Diego Luna On Working With Katy Perry In ‘The One That Got Away’ Music Video

“I saw this British number calling me at 2 a.m., and I have family in England, so I thought it was, like, a drunken cousin from a bar or something,” he said in PEOPLE’s Stars Wars: The Secrets of Rogue One special issue.

Luna said he went back to sleep before realizing what it might be and deciding to check: “I ran over and saw that it was [director] Gareth Edwards wanting to give me some news! I just jumped around like crazy — it was quite a special day.”

Waterhouse also had a few acting credits in the past year, appearing in the horror mashup Pride and Prejudice and Zombies as well as Absolutely Fabulous: The Movie. The actress previously had a role in Insurgent — the movie adaptation of the second book in the Divergent series.

The vacation comes at the start of another busy year for the two as they gear up for high-profile releases in the coming months. Luna is set to appear in a remake of Flatliners alongside Nina Dobrev, Ellen Page and Kiefer Sutherland, while Waterhouse will appear in Billionaire Boys Club starring Carrie Fisher’s daughter Billie Lourd, Emma Roberts, Kevin Spacey and Ansel Elgort. 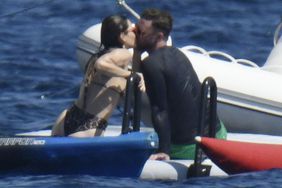