Diane Kruger Opens Up About Her Grief-Stricken, Cannes-Winning Role — and Its Link to Her Own Personal Loss

For Diane Kruger, her starring role in Fatih Akin's In the Fade was more than just lines on a script — it was a personal expression of grief

For Diane Kruger, her starring role in Fatih Akin’s In The Fade was more than just lines on a script — it was a personal expression of grief.

Speaking with PEOPLE at the 70th annual Cannes Film Festival, Kruger opened up about her own recent experience with loss and its influence on her role in In the Fade, in which she plays a woman grappling with the aftermath of her family’s death in a bombing. Kruger took home the festival’s coveted best actressaward for her harrowing performance in the drama.

“This movie is really about grief,” Kruger said. “When we were shooting the film, my grandmother and my stepdad passed away in the same year, so I was feeling a lot of grief.”

Kruger channeled that emotional energy directly into her character. “Sometimes life happens like this,” Kruger said, “I felt very raw and very emotionally available for that kind of movie.”

“This is probably the most personal movie I’ve made,” Kruger added.

“In the Fade talks about the aftermath of a terrorist attack,” Kruger began, “and I think that given what’s happening in the world, unfortunately, the movie is very timely.”

For full coverage of the Cannes Film Festival, including the biggest stars and best red carpet moments, check out people.com/cannes-film-festival

The film offered a host of new experiences for the German-born Kruger, who had never actually shot a movie in her native language. “I started making films in France and then America, so that was very special to me as well.”

“It was the most fun for me to find my roots again,” Kruger said of getting into character. “She’s like this tough, German warrior, which I really loved.”

The award set a new benchmark for Kruger, who was honored alongside other Cannes winners like Joaquin Phoenix and Sofia Coppola. Even her ex, actor Joshua Jackson, took to social media to congratulate her, quipping, “Only question is what took ’em so long!” 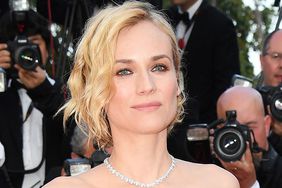