Listen up, men: Demi Moore wants you to take notes while tuning into her steamy new podcast.

And when it comes to men, Moore wants them to walk away with a better understanding of what women want. The actress said her goal is for male listeners to "feel more comfortable by having more awareness of what pleases a woman, what they’re interested in."

"Because it’s equally difficult for men to know how to engage if they’re in the dark," said Moore. "I’ve always said men figure it out for themselves, and they know how they work, but what helps them to know how a woman works? I mean, we don’t know. We need a little help learning how to finesse that as well."

Moore also detailed how the sexy new role had a personal impact on her, bringing realizations about her own hangups surrounding sexuality.

"I think one of the great opportunities doing what we do is being able to use things to help push you beyond where you are resting," said Moore. "In this case, I realize there’s a part for me that my sexuality has felt like it’s a dangerous, and that I should just keep it under wraps, that I should keep it shut down, and it’s better to just not negotiate or take it off the table."

She added, "This has been an incredible opportunity of opening into areas that I’m not comfortable with, and that unto itself is already a gift."

Dirty Diana, a six-episode series, is created by director/writer Shana Feste and portrays sex and longing from a female gaze, with female pleasure at its center. Moore explained that she wants to shatter stigmas around female sexuality and rewrite the narrative about objectifying women.

"The conditioning can’t change until we change the narrative. It’s something that we really need to do," she told Variety. "If we as women want to change the experience of being objectified, then we need to bring in another perspective."

Dirty Diana, a QCODE podcast, is available on Apple Podcasts and most major podcast platforms, with new episodes debuting on Mondays. 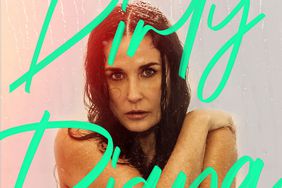