The CHiPs actor, 42, appeared on Jimmy Kimmel Live! on Wednesday night, saying he wasn’t aware of Bell’s story until a stranger recounted the story of Shephard’s kids walking in on him and Bell while having sex.

To clear things a bit, Shephard told Kimmel, “Okay, they didn’t walk in while I was, like, pounding mom. We put on the TV in the living room — we’re bad parents — and then we stole away for a minute, afternoon delight, but we were just under the sheets and they walked in.”

He continued, “It was more just explaining why we’re taking, like, a nap in the afternoon while they were loose. It was full coitus interruptus.”

“Suffice it to say, I wouldn’t have gotten out of the bed at that moment,” the actor added, laughing. “That would’ve been a strange nap I was taking.”

RELATED VIDEO: The Cast of Bad Moms Give Their Advice on The Best Time to Talk to Your Partner

Bell, 37, revealed on The Talk last week that her children with Shepard once walked in on them in a compromising situation.

When asked about her most embarrassing moment involving her family, the actress didn’t hesitate: “Oh, they’ve walked in on us having sex.”

After the show’s cohosts gasped, Bell quickly said, “That’s how they were made, it’s OK!”

When Julie Chen asked what she and Shepard did, the actress said, “Well, we didn’t, like, continue… we sort of just went like, ‘Hey, what’s up? What do you need? What do you need?’… And then we just said, ‘Mommy and daddy are just going to take a nap for a couple of minutes.'”

The actors share daughters Delta, 3 next month, and Lincoln, 4½. 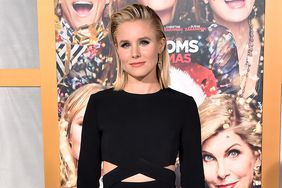