Dave Franco is ready to "rock a mic like a vandal" to play Vanilla Ice in the upcoming biopic about the '90s icon, To the Extreme.

Franco, 35, opened up about tackling the role during a recent interview with Insider, saying that he envisions the project to be like 2017's The Disaster Artist, which starred the actor and his older brother, James Franco, and centered around the making of Tommy Wiseau's The Room — a film now famously deemed as “the Citizen Kane of bad movies.”

"With that movie, people expected us to make a broad comedy where we make fun of Tommy Wiseau, but the more real we played it, the funnier and heartfelt it was — that's the tone we want for this one as well," he said.

As the film's crew is "inching closer and closer to preproduction," Franco added that he's had phone calls with the "Ice Ice Baby" hitmaker — born Robert Van Winkle — to speak about the project during his time at home amid the coronavirus pandemic.

"Rob is such a sweet and intelligent guy and he's been super helpful in the process of getting all the details correct and making us privy to information the public doesn't know," Franco said. "Just talking to him I can't help but think about the rabbit holes I'm going to go down to get ready for the role."

Written by Chris Goodwin and Phillip Van and titled after Vanilla Ice's 1990 album, To the Extreme was first thrust into the spotlight when it landed on 2018's The Black List — an annual list of unproduced screenplays voted to be favorites amongst film executives and those working in Hollywood.

"From a high school dropout selling used cars in Dallas to having the first hip hop single to top the Billboard charts with Ice Ice Baby, a young Vanilla Ice struggles with stardom, extortion attempts, and selling out as he makes music history," the logline for the project read at the time.

While a listing for the project was published in Production Weekly in 2019, Franco said in his interview with Insider that there's currently no start date on production due to the ongoing pandemic.

For now, Franco is gearing up for the July 24 release of The Rental, his directorial debut, which stars wife Alison Brie.

The actor opened up about working with Brie, 37, in Moviemaker Magazine's Summer 2020 issue, telling Moonlight filmmaker Barry Jenkins he couldn't have done it without her.

"There were moments throughout the shoot where I would really get into my own head and start to doubt myself in small ways," he admitted. "And so to be able to go home to her every night and have someone who would build me up and remind me that things were going well and that I was doing a good job — it was invaluable and I honestly don’t think I could have done this without her."

He continued, "But I swear, watching her intently every day for five weeks, I realized that she might be the greatest actress on the planet and I’m not just saying that because she’s standing 10 feet away."

"She’s a really unique actor in the way that she’s able to balance heavy drama with moments of levity, sometimes within the space of a single scene. … On top of her just being an incredible actress, it was so nice to have her there with me." 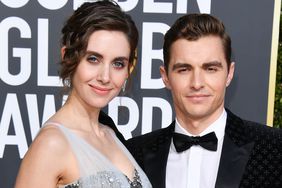