Courteney Cox Says She Had a 'Crush for Sure' on 'Ace Ventura' Costar Jim Carrey: He's 'So Funny'

Courteney Cox played coy on Howard Stern's SiriusXM show after the host asked her if there'd been anything "romantic" between herself and Jim Carrey when they were making Ace Ventura: Pet Detective

Courteney Cox is admitting to once having a "crush" on Jim Carrey — but beyond that, her lips are sealed.

"He was so funny; it was just about cracking up all the time," said Cox of Carrey, 59. "I remember when we first rehearsed, he was just playing it straighter. And then he turned it on when we started filming and I thought, 'Oh my God, he's the funniest person.' "

Carrey and Cox — who played Ace Ventura and Melissa Robinson, respectively, in the slapstick comedy — "became really good friends" according to the actress, and her costar "cracked [her] up the entire time."

When asked by Stern, 67, whether non-platonic sparks flew, she admitted, "There was a crush for sure."

"But nothing romantic?" Stern asked, to which Cox deflected in response with a laugh, "I don't … I'm going to go to the bathroom."

"The reason I ask that is there are these two talented people," offered the host. "I can't see how that wouldn't happen. If I was around you, I would have at least tried."

In a 1994 interview surrounding the film, Cox previously said that Carrey's humor begins as "he rolls out of bed" and is "in him 24 hours a day."

"He has another side to him, believe me, that's very serious and actually really intense. But [the comedy] is there all the time," she added.

Aniston, 52, also chatted with Stern about her love life of years past, insisting that there was no awkwardness at all between herself and ex-husband Brad Pitt.

"It was absolutely fun," she said of having reunited with Pitt, 57, back in September for a live table reading of Fast Times at Ridgemont High. "Brad and I are buddies, we're friends."

"And we speak, and there's no oddness at all, except for everyone that probably watched it and was wanting there to be, or assumed there to be," Aniston continued. "We had fun, and it was for a great cause, [Sean Penn's community-relief nonprofit] CORE." 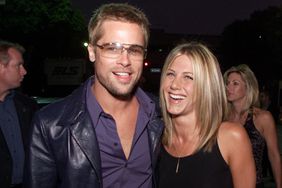