Authorities responded to the incident at the Bonanza Creek Ranch set of Rust around 1:50 p.m. local time following 911 calls indicating "an individual had been shot on set"

Cinematographer Halyna Hutchins was killed and director Joel Souza was injured on Thursday after Alec Baldwin accidentally misfired a prop gun on the New Mexico set of his upcoming western film.

Authorities responded to the incident at the Bonanza Creek Ranch set of Rust around 1:50 p.m. local time following 911 calls indicating "an individual had been shot on set," the Santa Fe Sheriff's Department wrote in a press release obtained by PEOPLE.

Upon further investigation, the sheriff's department learned that Hutchins, 42, and Souza, 48, were "shot when a prop firearm was discharged by Alec Baldwin, 63, producer and actor."

As of Thursday night, Souza was undergoing treatment for his injuries at Christus St. Vincent's hospital, officials said.

Earlier on Thursday, a spokesperson for Baldwin told PEOPLE that "there was an accident today on the New Mexico set of Rust involving the misfire of a prop gun with blanks."

Production on Rust has been halted for the time being, Baldwin's rep added.

At the time of publication, representatives for Baldwin did not respond to PEOPLE's request for additional comment.

Earlier in the day, Baldwin posted a picture of himself in character on set. "Back to in person at the office," he captioned the Instagram photo. "Blimey…it's exhausting."

"The entire cast and crew has been absolutely devastated by today's tragedy, and we send our deepest condolences to Halyna's family and loved ones," the film's production company, Rust Movie Productions LLC, said in a statement. "We have halted production on the film for an undetermined period of time and are fully cooperating with the Santa Fe Police Department's investigation. We will be providing counseling services to everyone connected to the film as we work to process this awful event."

The film, written and directed by Souza, is reportedly set in 1880s Kansas. Baldwin stars as an infamous outlaw who goes on the run with his 13-year-old grandson after the teenager is convicted for the accidental murder of a local rancher and sentenced to hang, according to Deadline.

Jensen Ackles and Travis Fimmel are also set to star in the Western thriller. 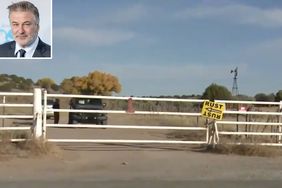